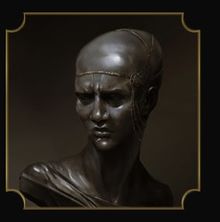 Mersadie Oliton was a documentarist attached to the 63rd Expeditionary Fleet,[1a] equipped with brain implants that gave her perfect recall and even the ability to "record" her visual memories.[1c]

Joining the fleet shortly after the pacification of Sixty-Three Nineteen, Oliton gained an introduction with Captain Garviel Loken of the Luna Wolves' Tenth Company. Though their initial meeting was awkward[1a][1b], the two developed a rapport, and he shared his recollections of the Great Crusade with her on a regular basis.[1c][1d]

She was good friends with Ignace Karkasy and Euphrati Keeler, but she and Karkasy did not accept the beliefs of the Lectitio Divinitatus, as Keeler did. Shortly before her departue from the Horus' expedition, she was implanted with a Warp-eye by Maloghurst in order to spy on Loken. All memory of this event was erased from her memory and later would prove disastrous for the Imperium.[4a]

Later in the Crusade she was rescued, together with Keeler and Iterator Kyril Sindermann by Iacton Qruze, Captain of the Luna Wolves 3rd Company, and escaped from the events of Isstvan III aboard the frigate Eisenstein commanded by Captain Nathaniel Garro, a Death Guard loyalist.[2a] Oliton's brain implants were put to use at a critical moment aboard the Imperial Fists' starfort, the Phalanx, when Rogal Dorn initially refused to believe Garro's report that Warmaster Horus had turned against the Emperor. Dorn was so enraged that he briefly thought of executing Garro on the spot, but Keeler insisted that he view the evidence of Oliton's implants: Horus presiding over the slaughter of loyalist Marines on Isstvan V.[2b]

After escaping the traitor Legions, it is revealed that Oliton has been kept prisoner on Titan. Mersadie had been sent visions through her dreams by Keeler that Loken was alive and she eventually begged Qruze for a single audience. Loken was shocked to his core; Qruze had purposefully let Loken believe Mersadie had died on the Vengeful Spirit. Their meeting was one of bitter, heartfelt sorrow and love. Loken took Mersadie's hand in his and they gazed at one another for the longest time, neither able to articulate what they were feeling, though in Loken's inner monologue the only word he knows to fit the situation is 'love'. Mersadie told Loken her memory coil implants had been surgically removed and that she had been imprisoned simply for being on the Vengeful Spirit. Loken was shocked and promised to have her freed and personally escort her to safety. Mersadie refused, stating that the masters of the prison weren't about to let her go. When he pressed the issue, Mersadie made it clear 'they', heavily implying Qruze and the Sigilite, would never let her go. Mersadie said her tear-filled goodbye, believing the mission Loken had been assigned would be his last. [3a] The rage Loken felt after leaving Mersadie's cell sent his mind back into his 'Cerberus' mentality. He nearly killed Iacton Qruze and would have had Tylos Rubio and Varren not intervened.[3b]

Shortly before the final phase of the Solar War, Oliton and her fellow prisoners were moved from Titan to the prison ship Aeacus. During this time Oliton began recieving visions from Keeler, who gave her an urgent message to give to Rogal Dorn at Terra. The Aeacus was subsequently attacked by traitor forces in the opening phases of Horus' attack on the Sol System, and the guards initiated their protocols to execute all the prisoners to prevent them from falling into enemy hands. Aeacus narrowly survived and met the fellow Navigator prisoner Nilus. The duo were eventually rescued by a refugee vessel bound for Jupiter. Both loyalist and traitor forces hunted her continually, and she was eventually rescued by Garviel Loken's ship at Jupiter after sending out a distress signal simply stating "Mesaide-Loken". Loken took her board the Phalanx in order to give Dorn Keeler's urgent message, and the Primarch agreed to meet with her due to the fact that she had been the one to originally inform him of Horus' treachery in the first place. However this was in truth an elaborate trap orchestrated by Chaos. It was revealed that the Navigator Nilus never existed, and had instead existed as a figment of her imagination. Nilus along with the visions were Keeler were just manifestations of the Daemon Samus, which manifested from the warp-eye Maloghurst had implanted years earlier. Madness and violence erupted across the Phalanx as Oliton acted as a vessel for the Daemonic to spill into the Phalanx. Not even Rogal Dorn could slay Samus, who simply would be reborn anew in one of the corpses of the fallen. In order to put a stop to Samus, Oliton bid Loken farewell and threw herself into the reactor shaft of the Phalanx. Her death closed the portal from which the Daemons had manifested, saving the Phalanx and dispelling Samus.[4x]