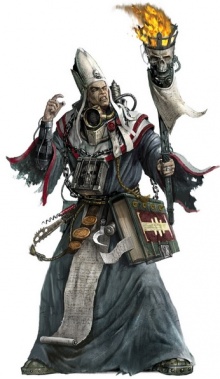 Ministorum Priests are the Preachers, Missionaries, Confessors, Deacons, Pontifices, Drill Abbots, and other clergy members of the Ecclesiarchy, often dispatched to accompany the Imperial Guard during campaigns and battles.

With their oratory they affirm the faith and resolve of the troops. Even in the midst of battle they preach the righteousness of the Emperor to the troops, instilling in them a ferocious resolve to destroy the enemy in close combat. Their fiery speeches can stir a populace to rebelling against a heretic lord or persuade an army to lay down its arms and submit to the mercy of the Emperor (which is inevitably quick and bloody).[3]

Priests favour close combat over shooting, and through their inspiring exhortations, instill this ideal into the Guardsmen following them. Such is their fury that priest-led squads will always charge any enemy within reach, making priests as ferocious as Commissars when it comes to motivating men, although they use inspiration rather than fear.[Needs Citation]

Traditionally a priest might be armed with an Eviscerator, a massive, two-handed chainsword capable of inflicting horrific injuries on living creatures, slicing through walls and even destroying vehicles. This overtly violent melee weapon makes the priest an even more powerful individual in close combat.[Needs Citation]

Priests often wear a rosarius, a potent device commonly used throughout the Adeptus Ministorum as it has a religious aspect as well as a protective one in that when the field is impacted it gives off a great blast of white light, leading some to believe that the Emperor himself is protecting the priest. A priest is often festooned with purity seals, and sometimes bears a holy relic so that all Emperor-fearing troops looking upon the image will be heartened at the sight.[1]

Inquisitors often see it useful for an Ecclesiarchal clergy member to form part of his retinue. Ecclesiarchy priests attached to a retinue are referred to as Hierophants.[2] 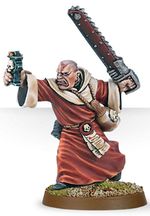 The Ciaphas Cain (Novel Series) refers to the Ecclesiarchy representatives attached to the Imperial Guard as "Chaplains".[4][5] These should not be confused with the Space Marine rank of that name.