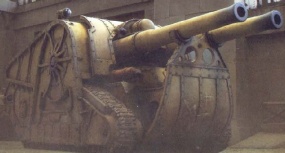 The Minotaur Artillery Tank is a self-propelled artillery vehicle of the Imperial Guard. Heavily armored and armed with two Earthshaker Cannons, this highly-durable vehicle is intended to operate in the heart of combat, providing fire support while under threat from the enemy's guns and redeploying under its own power.[1]

The exact origins of the Minotaur, like so many vehicles, is not entirely known. Some scholars believe it to predate even the Great Crusade, citing certain frescos on the Templis Nemesii on Holy Terra itself. Others cite the similarities it shares with the Malcador, itself an ancient design with a forgotten history, to theorize that it may be a variant of the heavy tank, or at least was constructed with the intention of using the same facilities. Regardless by the time of the 41st Millennium the Minotaur has become a rare vehicle, largely supplanted by the Basilisk in Imperial Guard service, though it has remained in use among certain siege artillery regiments and thousands are believed to be held in Departmento Munitorum strategic reserves.[1]

At the Siege of Vraks the Minotaur made a relatively late appearance, employed by the forces of Chaos as the Imperial besiegers began assaulting the certain wall and Citadel itself. About a hundred are believed to have been contained within Vraks' deep storage arsenals and were employed to devastating effect in artillery duels. However due to the aggressive manner in which they were used by the traitors, around a dozen were recovered[1] by the Death Korps Quartermasters[2] and later re-consecrated by the Adeptus Mechanicus.[1]

While sharing the chassis and engine of the Malcador, the Minotaur has many unusual features not found in other Imperial artillery vehicles. The most notable of these is its deck layout, with engines, drive systems and ammunition evenly distributed across the superstructure, the crew compartment placed in the front of the vehicle and the twin primary weapons placed on a central axis point facing rearwards. The Minotaur is therefore able to "reverse" into prepared firing positions and then rapidly move "forward" through ground it has already cleared, while the centerline mounting not only allows it to carry its massive payload but also provide inherent recoil stabilization when firing. In addition to the thick armor plating more commonly found on heavy tanks, the Minotaur is also equipped with a Searchlight and Smoke Launchers, and can be upgraded with Extra Armour, a Hunter-Killer Missile, Dozer Blades and a pintle-mounted Storm Bolter or Heavy Stubber.[1]

If the Minotaur has one drawback it is the complexity of its construction. This is especially true for its advanced hyrdaulic and recoil compensation systems and amount of armored protection it requires, factors which have contributed to its steady decline over the years.[1]

The name Minotaur was shared with a four-wheeled armored vehicule also in service with the Imperial Guard. The Minotaur was a command version of the Centaur Reconnaissance Vehicle.[3] It was lated renamed as the Pegasus Command Vehicle to avoid confusion. [4]