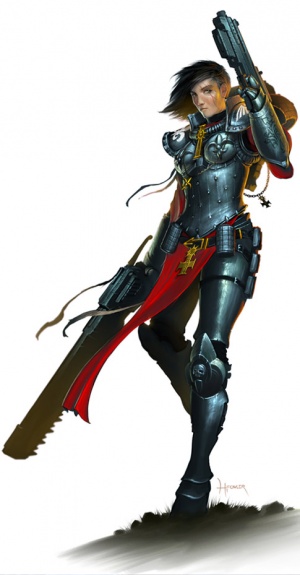 Celestian Miriya is a member of the Order of Our Martyred Lady.[1]

As a Celestian Eloheim she was tasked with passing judgment on the world of Hollos after it was suddenly discovered to be accessible again after two thousand years when a ship was found from there. The system drew suspicion due to it being lost to a Warp Storm for two thousand years, and due to the single crewman on the ship being a Replicae. Miriya's investigations with her squad revealed that the planet was originally a research colony studying Replicae technology, and that Replicae were used as soldiers to defend the world from Chaos incursions during the time it was cut off. During this time, most of the more recent Replicae had the chemical process in their bodies which made them subservient and gave them red skin go dormant, giving them free will to rebuild Hollos as a pacifist society, shunning the wars for which they were made. Miriya also uncovered a plot to overthrow the Replicae by the humans.[2]

Initially, Miriya elected to follow Imperium decree, which specified that Replicae do not hold citizenship, and turn over all Replicae to the Adeptus Mechanicus in order to avoid the bloodshed a revolt would produce. Unfortunately, the revolutionaries proved to be a cult of Tzeentch who, upon the objection of the Replicae present, staged the revolt anyway. Miriya attempted to convince the Replicae to fight for their planet, but was refused, due to their pacifism. Rather than resort to an orbital bombardment which would cost millions of lives to stop Chaos, Miriya ordered the representative Adept of the Mechanicus to release a chemical agent which would reactivate the portion of the Replicae's neural chemistry which made them subservient and denied them free will, despite this being irreversible. The newly converted Replicae were then ordered to stop the revolt, and they did so without hesitation or question alongside Miriya's sisters.[2]

A time after these events, it became her duty to transport a psyker, Torris Vaun, after he was captured. Nevertheless, mid-transport of the prisoner aboard the ship "Mercutio," they were attacked by traitors on the ship. Vaun was freed and Miriya's fellow Sister, Lethe Catena, was killed.[1a]

Continuing onto her destination of Neva, Miriya was forced the capital Noroc to account for failure of delivering the prisoner by Lord Deacon Viktor LaHayn. LaHayn demanded Miriya to suffer for her actions. It would be her duty to find Vaun. After much searching, Vaun later made himself known when he, leading a group of criminals, attacked and kidnapped the Governor, Emmel. It was Miriya who later allowed him to escape as Vaun's allies destroyed everything they could, including the Nova's Cathederal.[1]

When the chaos finally settled, it was apparent that LaHayn was not all he claimed to be. After much research, Miriya's allies unraveled the plot that involved the freeing of Vaun and the connection to LaHayn. With accusations flying, the planet erupted into war and the Sisters of Battle were brought in full force. After much destruction and warfare, Miriya finally managed to capture Vaun. It was with his interrogation that a greater plot was revealed; Vaun was a product of experimentation on psykers.[1]

Miriya, Verity (her vital assistant), and the fellow Sisters Cassandra and Isabel uncovered and destroyed this plot, ending such heretical influences; however, because of the methods used by Miriya and of the original ordeal with Vaun, she was relieved of her position as a Celestian elite and was reduced to a line rank Sister of Battle by Canoness Galatea. She later accepted a post as part of a mission to reclaim the abandoned Sororitas convent on Sanctuary 101. Verity agreed to accompany her there.[1x]