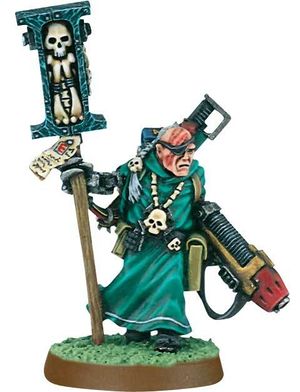 An Imperial Missionary
A Missionary is an agent of the Missionarius Galaxia and tasked with spreading the word of the Imperial Creed throughout the Imperium.[1]

Missionaries have little guidance from the Adeptus Ministorum and are mainly free to spread the faith in any way they see fit. Missionaries are skilled in oration, manipulation, and subtly changing a culture to bring it into line with the Imperial Cult, replacing the gods of the existing pantheon with Imperial Saints or the ritual consumption of human flesh with that of a rare animal. If these methods fail to change the religious habits of a newly discovered population, they are also often skilled warriors not above the use of brute force.[3]

They usually run charitable institutions called Missions on newly discovered human worlds. Missions take the form of schools and hospitals. One of the purposes of these institutions is to further the observance of the Imperial Cult. The most famous Missions are the Schola Progenium, which are schools for training Imperial orphans to be Imperial servants[1][2].

Missionaries range from the young fervent hopefuls to the old, wise, and toughened members of the Missionarus Galaxia. They are always at the forefront of Imperial expansion and accompany the crusading armies as they discover new worlds and contact lost civilizations.