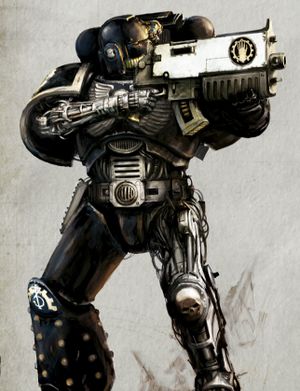 The Moirae Schism was a major event in Adeptus Mechanicus history that took place during the Nova Terra Interregnum in M35. Sparked by a heretical creed generated on the Forge World of Moirae, it was the greatest civil war within the Adeptus Mechanicus since the Schism of Mars during the Horus Heresy.

The Moirae Tech-creed was based on the prophetic wave of calculations of a triad of tech-mystics enshrined within the rebellious Forge World of Moirae. The creed maintained that the beacon of the Astronomican contained hidden messages within its micro-fluctuations, and that these messages were from the Omnissiah and prophetic in nature. The Moirae Tech-priests compiled these apocalyptic messages in their archives, copies of which quickly spread through many of the Cult Mechanicus' sub-sects. These radical teachings included references to the future overthrow of Mars and the fusion of the Adeptus Mechanicus and Ecclesiarchy. Such claims were treated as heresy by Mechanicus authorities on Mars, and civil war was quickly sparked between traditionalist and radical elements.[2a] Over two thousand years of bloody strife would pass before the rebels were finally purged by the Imperium.[1]

While Moirae itself was swiftly destroyed by a Adeptus Mechanicus Fleet sent from Mars [2a], the schism had already spread throughout the Mechanicus. Several Titan Legions and Space Marine Chapters with close ties to the Mechanicus were also caught up in the insurgency.[6]

In particular, the Iron Hands and many of its successor Chapters harbored Moirae believers within their ranks; in particular Clan Borrgos saw almost total conversion to Moirae beliefs.[5] The crisis came to its climax when Moiraen faction within the Chapter attempted to seize control of Clan Dorrvok via its Gene-Seed banks. Unable to convert their battle-brothers to their creed, they intended to impose adherence on a genetic level by forcing unity into all new recruits. Only by the intervention of Clan Raukaan was disaster prevented when the gene-banks on Dorrvok's Land Behemoth were saved and the insurgents brought swift death. Raukaan's actions however were condemned by both factions, creating a three-way standoff that only ended when all realized that the Inquisition would seek to exterminate the Chapter if it erupted into full-fledged civil war. A compromise was reached and the Iron Council convened the Decree Ecrutis which exiled the Moiraean followers along with those from all other Iron Hands successors.[5] Others such as the Red Talons simply destroyed their recalcitrant elements.[6]

These fleet-based exiles accepted other outcasts from Iron Hands successor chapters, to the point where, by the end of the Moirae Schism, this force effectively constituted a chapter in its own right. Recognising this, the High Lords of Terra took the unusual step of forming an entirely new Chapter from this fleet, the Sons of Medusa. The new Chapter proved its loyalty through its zealous participation in the Great Cull, the destruction of those elements of the Imperium whose devotion to the Moirae Creed marked them for death.[2b]

It is also known that during this Schism Techno-Priests of Moirae utilised a hidden machine code during their construction to cause Whirlwind Hyperios' produced on this Forge World to power down upon receiving certain command-cipher. Since that many Space Marine Chapters distrust the Whirlwind Hyperios' altogether.[3]

Of all the battles of the Moirae Schism, none were so expansive or long as the prolonged naval engagement over the nebulas of the Gulf of Black Shadows. There, mining wars between rival forge worlds escalated to massive fleet battles. It is estimated that the wrecks of over ten thousand ships – from mining craft to warships – float between the gas clouds. Yet the battle is far from over, for within the floating graveyards, salvage crews continue the war for centuries, fighting each other in desperate boarding actions, each side seeking to reclaim valued tech. Entire Cybernetica maniples are recovered by opposing sides, and reprogrammed to attack their former controllers.[4]

Following its defeat, any remnant of Moirae ideology was quickly expunged from the Imperium. The Ecclesiarchy and inquisition united to ensure no remnant of it remained and that it would die in the ashes of history. It is said that a single copy of the Moirae Creed remains, held deep in the vaults of the Ordo Hereticus. Shocking, these Inquisitors discovered that the creed predicted the destruction of Cadia in the 13th Black Crusade as well as the formation of the Great Rift.[5]