The Mole Launcher is a specialized missile launcher utilized by Imperial Guard Engineers, in particular the Death Korps of Krieg. Known more formally as a breaching torpedo, the weapon fires burrowing warhead capable of digging through obstacles and detonating on the other side.[1]

The explosive charge is contained within a shoulder-mounted launch tube, which can lock in place facing the ground or the side of a tunnel. When fired the torpedo is launched into the earth, where a powerful drill and small powerfield generator allow it to slice through rock very quickly. The projectile also contains a guidance system linked to a separate control panel, allowing a team member to guide the the torpedo to its target.[1]

The Mole Launcher's primary purpose is for blasting into enemy tunnels, causing a sudden and catastrophic collapse. It can also be used against surface targets, burrowing up to the surface and exploding underneath a bunker or vehicle where it's armouring is weakest.[1] 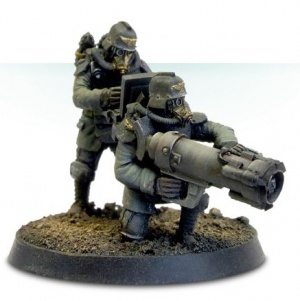 Mole Launcher Team of the Death Korps of Krieg