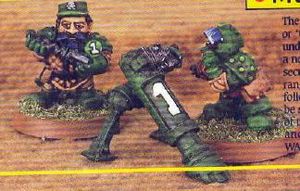 The Mole Mortar is a support weapon used my some Imperial forces. It is basically an inverted mortar that fires a burrowing sub-surface missile, or tunnel-torpedo, into the ground.[1a] The missile burrows its way toward its target, bypassing all surface hazards and defenses, emerging from the ground beneath the target. The missile is self-guided and able to track its target through solid rock.[Needs Citation]

The mole mortar is an invention of the Squat Engineers Guild, and has been adopted by the Imperial Guard.[Needs Citation] Actually it was developed to destroy enemy tunneling vehicles but was so succesful that now used as a short-ranged assault weapon. [1b] It is sometimes used to breach fortifications too strong for conventional weaponry to damage. Due to the unique way it operates, the mole mortar is able to circumvent most defences, striking from below to explode within bunkers and other structures. Mechanicus Skitarii armies favour the mole mortar as a close support weapon, allowing them to strike unexpectedly at the most heavily-armoured enemy, and allowing the Skitarii infantry to exploit the confusion sown in the enemy lines.[Needs Citation]

The mole mortar was introduced in older editions of Warhammer 40,000, but has not reappeared in more recent Codices and Rulebooks. However, a similar weapon, the Mole Launcher appears in more recent publications, used by the Death Korps of Krieg.[Needs Citation] This weapon's relationship with the older Mole mortar is unknown.