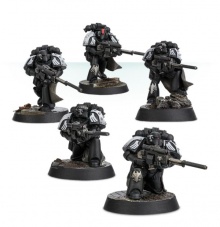 The Mor Deythan were elite infantry of the Raven Guard during the Great Crusade and Horus Heresy.[1]

Informally known as 'Shadow Masters', these were a small cadre of infiltration squads within the Legion already well known for their skill in such tactics. Each is a veteran of the Lycaen Uprising who fought at the side of Corax himself. When the Emperor of Mankind arrived on Deliverance he judged many of the rebels who had fought alongside his son worthy of transformation into a Space Marine and helped remind Corax of his roots as a revolutionary and freedom fighter.[1]

At the beginning of the Horus Heresy, the Mor Deythan were few in number after eight decades of constant warfare and rarely admitted new recruits into their ranks. Most who remained were grizzled veterans who were masters of moving silently through the shadows and attacking at the best opportunity. They utilized a range of specialized equipment. However rumor had it that they possessed the ability of their Primarch's ability of nigh-invisibility.[1]

By M42[2], the abilities of the Mor Deythan, have become incredibly rare among those Space Mariness descended from the Primarch Corax.[3] However after the Great Rift[2] left the Imperium beset by foes, the Raven Guard's Chapter Master, Kayvaan Shrike, restored the Mor Deythan in order to help topple these threats. So far, though, they only have four members in the re-established order.[3]