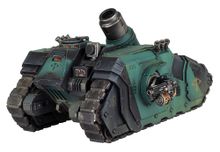 The Morbus Heavy Bombard was a weapon used by the Space Marine Legions during the Great Crusade and Horus Heresy.[1]

Fitted to the Arquitor Bombard vehicle, the Morbus was patterned on the more common Demolisher Cannon.[2] This Heavy Bombard fired shells that could devastate even the mostly heavily armored units. Alongside explosive shells the Morbus could fire Carcass Shells which were loaded with biological agents capable of reducing unarmored warriors to gore splatter in a few seconds.[2]

The weapon impressed Mortarion to the point where he incorporated its design with the Plagueburst Crawler.[1]