"They may spend every off-duty minute polishing their shiny boots and marching up and down the parade ground in perfect formation, but don't let that fool you. These men are steel-eyed, cold-blooded killers and I'd as soon have a platoon of them in my force as I would a company of other troops."
-Gharan O'Hen, Army 212 Chief of Staff, on the Mordian Iron Guard[3a]

The Mordian Iron Guard are Imperial Guard regiments, originally from the planet Mordian. A harsh and unforgiving planet given to extremes, it was ruled in the Emperor's name by a body known as the Tetrarchs. The rule of the Tetrarchs was harsh, autocratic and above all absolute, a necessity due to planet's scarce and strictly-rationed resources. This environment bred a regimental system dedicated to the chain of command and an iron discipline at all levels. The Mordian Iron Guard are named and renowned for their iron resolve and their dour and unforgiving natures. As of the formation of the Dark Imperium, the planet of Mordian had been assailed by Chaos.[15]

Training for the Iron Guard is as rigorous as possible, instilling in each Guardsman fierce loyalty and determination to their cause: the destruction of the Emperor's enemies and the preservation of Mordian. It is only through their legendary discipline and ruthless pursuit of the enemy that the Iron Guard can prevent their world from descending into starvation and savagery.[1a] Among the most dependable troops in the entire Imperium, a Mordian Guardsman will follow orders to the letter and without a moment's hesitation, firing and reloading his lasgun in the heat of battle until he or his enemy has been destroyed.[3a] These die-hard soldiers are all accomplished sharpshooters and proficient in close order drills.[2c] 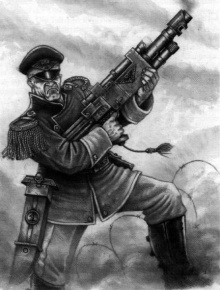 A Mordian Iron Guard regiment in battle is a solid wall of brightly-uniformed, perfectly-formed soldiers who cut through the enemy's ranks with precisely-timed volleys of fire behind a hedge of polished bayonets.[3a] Even in the face of the overwhelming daemonic hordes of Chaos, Iron Guard regiments will stand their ground, striking down their foe with disciplined fire; if forced to withdraw their lines will never break.[1b] They organize their support weapons into separate Heavy Weapons Platoons and make use of both Ratling Snipers and Sanctioned Psykers on the battlefield.[2c] 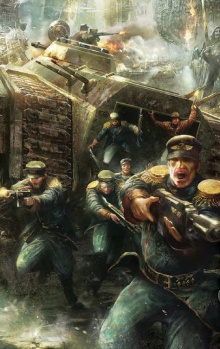 The Iron Guards prefer to go into combat wearing the same dress-style uniforms they do on the parade ground. The bright colors and elaborate decoration on Mordian uniforms often mislead their enemies into thinking they are facing ceremonial troops with little combat experience, though this misapprehension is usually corrected as soon as they attempt to advance in the face of the Iron Guards' precise volleys and unyielding resolve. Upon their formation each regiment is presented a lavish banner, created within the Tetrarchal Palace, during a ceremony at which every Guardsman swears to never let it fall or be captured.[3a] Their preferred squad special weapon is the Grenade Launcher while the Lascannon is the principle heavy weapon.[2c]