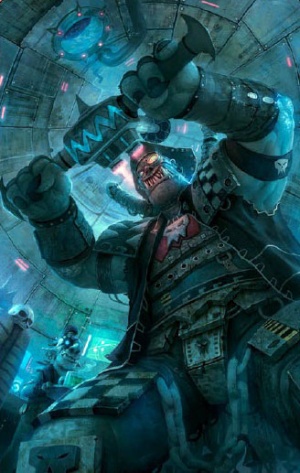 Morgaash Kulgraz, also known as Kaptin of Da Wurldbreaka and Warlord of Undred-Undred Teef is the Ork Freebooter and one of the greatest Warlords in the Koronus Expanse.[1]

He claims to be the biggest and baddest Ork of Undred-Undred Teef, but local Orks are far from being united under him as he has several strong rivals. Demonstrating fierce ambition and ruthless cunning of a kind seen only in very few Orks across the galaxy, Morgaash has slain and subjugated every Ork in his path, growing increasingly massive as other Freebooter Kaptins challenge him. The last two decades of M41 have been particularly prosperous, with Morgaash ripping Uzrek Mag Nazdakka limb from limb in brutal unarmed combat and claiming Uzrek’s old ship, Da Wurldbreaka as his prize. Morgaash spends most of his time on the ship, where he is plotting the downfall of Snaga, whom he sees as his main opposition to power.[1]

Morgaash is known to be a towering monster of an Ork, larger than most and physically imposing enough to back up his claims. Few accurate records exist of Morgaash himself from the Imperial vessels he has assaulted—by the time Morgaash himself boards, the battle is normally won and all hope of escape lost. However, occasional survivors' reports claim that the Warlord is some three and a half metres tall and may weigh as much as half a tonne. Worse, Morgaash is a bold and daring leader, particularly during ship-to-ship combat, and more than a few enemies have underestimated what the Orks are capable of under his leadership. He is highly skilled in warfare and deadly close combat and is known to be a masterful pilot and navigator and is able to speak Low Gothic in addition to the Ork Language.[1]

Warlord carries a personal Big Choppa. Known as Da Rippa, it is sufficient to shear through deck plating and leave gouges in bulkheads and blast doors when wielded by Morgaash’s immense strength. He is also equipped with a personal unstable Kustom Blasta and a huge pistol known as Skatta Kannon. Morgaash is protected by customised 'Eavy Armour. Being a rich Ork he also posesses a huge amounts of Teef, crude hand vox, fancy hat and other shiny bitz carried around by dozens of his Gretchin slaves.[1]