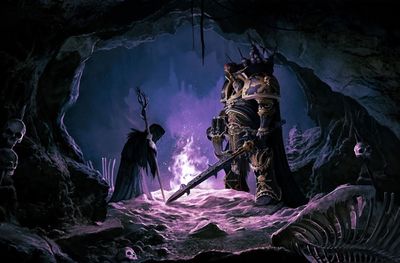 Moriana was the damned seer of Abaddon the Despoiler.

Moriana's origins are shrouded in mystery. According to Iron Warriors Warsmith Honsou, it was rumoured that she was once a handmaiden to the Emperor of Mankind, before she fell from grace and was banished from the Imperium[1].

According to another source, she was once one of the few members of the Horusians within the nascent Inquisition, a sect which believed that the dark power which had animated Horus Lupercal during the Horus Heresy could be harnessed to resurrect the fallen Emperor. The Horusians were regarded with fear and suspicion by the rest of the Inquisition and consequently trod carefully, while some, like Moriana, fell to Chaos[2].

Iskandar Khayon claims that he met her in the Tomb of Horus on Maeleum, where she told him of the current state of the Imperium. Upon returning to the Vengeful Spirit with her, she told Abaddon that the death of Thagus Daravek was a critical part of his destiny, because no future she saw had both of them alive.[3]

Whatever the truth, she was an incredibly powerful psyker with a gift of clairvoyance that led to her being consulted frequently by Warmaster Abaddon. Honsou's lieutenant, Cadaras Grendel, snorted that this was hardly a rousing endorsement, considering the failure of Abaddon's twelve (at that time) previous Black Crusades. But Honsou countered that it was largely thanks to Moriana's counsel that Abaddon was able to seize the coveted Blackstone Fortresses during the Gothic War.[1]

At some point in the 900's M41, a Deathwatch kill-team led by Uriel Ventris tracked down Moriana's lair and attempted to kill her, but without success[1].

Honsou tracked down her lair on an unnamed planet, seeking advice on how to find and revive the Daemon Prince M'kar, a vital ally for Honsou's planned invasion of Ultramar. Moriana agreed to help him, asking only for his blood oath that he would prosecute his campaign to the bitter end, no matter what. It seemed that Moriana was largely indifferent to the designs of Chaos, and gave deference to no one, including Abaddon, but was still moved by hatred of the Imperium.[1]

Moriana appeared to Honsou as a wizened old woman, whose eyes had been removed centuries earlier[1].

Battlefleet Gothic: Armada (Video Game) strongly suggests that the figure who caused Abaddon to attempt the capture of the Blackstone Fortresses was actually the C'tan Mephet'ran, the Deceiver, disguising himself as Moriana. This calls into question whether this was an isolated incident or if Moriana has always been a puppet of Mephet'ran;[4] notably, characters such as Iskandar Khayon claim that Moriana is a generally dividing and deceitful influence.[3]