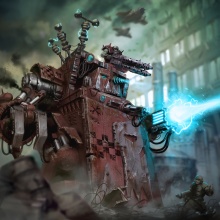 The Morkanaut is a type of heavy Ork walker.

Built as an effigy to the Ork god Mork, it possesses all the lethal cunning of its namesake. The Morkanaut is built, armed, and piloted by a Mekboy who equips it with all kinds of glowy energy weapons capable of unsubtle brutality. Their pilots are often outcasts who have joined the Great Waaagh! or Freebooter warbands, hunting for the technological secrets of other races. Such Badmeks have been ejected from their tribe for crimes such as using the Weirdboy hut for target practice. These rogue pilots are especially dangerous, and often begin their wanderings by flattening their former tribe's settlement as an act of revenge.[4]

The Morkanaut's main weapon is the massive Kustom Mega-Kannon, as well an over-sized Power Klaw known as the Klaw of Mork. It also is equipped with two twin-linked Big Shootas, two Rokkit Launchas, and a Kustom Mega-Blasta.