The Mortifactors, alternatively spelt as Mortificators [2], are a Space Marine Chapter recruited from the Feral World Posul, which is shrouded in almost perpetual darkness. The population of the planet is broken down into tribes, and the mightiest tribe is ideal for recruitment into the Mortifactors. They are a successor Chapter of the Ultramarines.[3]

The Mortifactors were founded by Sasebo Tezuka, who was led to Posul after consulting the Emperor's Tarot.[1] The Mortifactors closely follow the dictates of the Codex Astartes, but their outward appearance differs sharply from the Codex's dictates. These differences are products of the culture of Posul.[3] The Basilica Mortis is the Mortifactors Fortress-Monastery, a star fort orbiting Posul. The halls are filled with rows of engraved skulls taken from the bodies of fallen Space Marines and the main chapel is filled with the skulls of foes claimed in the aftermath of victory. The Chapter's funerary rites are led by its Chaplains, recruited from the priest class of Posul, and many characteristics of the Chapter cult are drawn from their culture.[3] 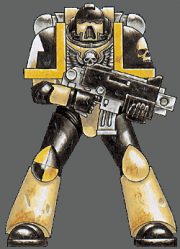 The tribal wars of Posul created a population suited to become Space Marines, and since Posul is a night world, Mortifactors are accustomed to fighting in low-light conditions. Even though Neophytes are inducted and indoctrinated into ways and traditions of the Adeptus Astartes and the Ultramarines' Primarch, they still maintain a significant amount of customs from their original tribes. Some of these traditions include meditating before battle (to reach a death-like trance in an attempt to commune with the Primarch and their ancestors), and drinking the blood and eating the flesh of their enemies after battle (then severing their heads and flensing their skulls)[3]. Neophytes who have not made a worthy kill in battle are not allowed to wear helmets and are all referred to as the Faceless, by their Blooded Battle Brothers. The Faceless are expendable and are not considered to be true members of the Mortifactors, nor are their real names learned by the wider Chapter. Once the Neophytes have become Blooded, though, they are accepted and they take the skulls of their Trophy Kills and wear them over their newly received helmets[9]. To others of the Imperium, the Mortifactors appear to be on the verge of heresy and are often held with suspicion by the Ultramarines or its Primogenitor Chapters, but they stand as some of the Imperium's most stalwart defenders[3]. Recruitment is done by the Chaplains[4], who wear the skulls of Space Marines[9] and preach to their Marines that death will unite them with the Emperor. Mortifactors regularly enter a meditative state of near-death prior to combat in order to find out how the Emperor would like them to fight their next battle. If they should die, they are taken to the Halls of Victors and sit at the feast table of the Ultimate Warrior (a divine being inhabiting the perfect body for fighting prowess), in the afterlife.[4]

In 998.M41, on the day of the Feast of the Emperor's Ascension, the entire Chaplaincy of the Mortifactors fell into a seven day trance. When they awoke they prophesied that the Third War for Armageddon against the Beast would be the 'Last Battle' and all men who would be warriors were called upon to fight. They entrusted their fortress monastery to their underlings and the entire Chapter (all 10 Companies) set off for Armageddon.[4][10]

Upon return from Armageddon, the Mortifactors set about re-establishing those Marines and Companies that were lost defending the world. The next full action performed by the Morifactors was in assisting the Ultramarines in defending the world of Tarsis Ultra against a splinter of Hive Fleet Leviathan[Needs Citation].

Although one of the colors of Mortifactors is considered yellow, they are shown in the How to Paint Space Marines, pg. 89 source as having only black and bone colors (see image). 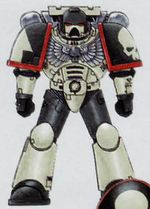