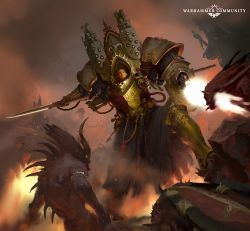 Morvenn Vahl is the current Abbess of the Adepta Sororitas and a High Lord of Terra.[1]

Originally a Celestian of the Order of the Argent Shroud, at the start of the Indomitus Crusade she was placed in her position by the Ecclesiarch in order to refill the previously vacant position of Abbess in a bid to improve morale. She was one of the youngest Abbess' ever to hold the position. Vahl was not even consulted in the matter and only found out about her promotion when Ecclesiarchy delegates arrived to inform her while she was waging the Reskgard Purgation. Vahl stunned all present by not immediately accepting the position, but instead declaring she would need a period of prayer to consider. Entering her Mission's shrine to Saint Silvana for three days, when she emerged she accepted the promotion to Abbess. Shen again shocked all present by immediately demanding someone fill her current position before making for Terra, ignoring the many planned days of celebration and ritual to mark the occasion.[3]

After arriving at Terra, Vahl proved far more difficult to control than the Ecclesiarch had initially thought. Continuing to wear full battle armour even in the presence of members of the Holy Synod, her pitiless and baroque nature intimidated many of the Cardinals and Ministorum bureaucrats. Her initial focus was to reestablish contact with as many Orders as possible in the wake of the Great Rift and nearly all of her work was focused around strictly military matters. Even after being promoted to a High Lord of Terra by Roboute Guilliman himself Vahl showed little interest in a political career and instead sought to continue her role as a military commander. To that end, few were surprised when she appointed herself commander of the Crusade against the traitorous traitor worlds of the Philosopher's Belt. Leading forces from every major Order, Vahl led by example and to the field personally to defeat the traitors. During these exploits she mostly ignored the many slew of Generals, Governors, and Admirals that clamored for her attention and instead left such matters to her Orders Dialogus and Orders Famulous staffers.[3]

After Vahl became the supreme commander of the Adepta Sororitas but unlike her predecessors she continues to lead her Sisters from the frontlines. The Ecclesiarch had initially hoped Vahl would be an easy pawn.[1][2][3] One of her most recent campaigns was that in Charadon, where she led Battle Group Tarsus and defeated the forces of the Black Legion Lord Discordant Akhorath Zeid.[4]

In battle, Morvenn Vahl wields the relic Power Spear Lance of Illumination‎, which was gifted to her by the Adeptus Custodes, as well as the Paragon Warsuit Purgator Mirabilis.[1] 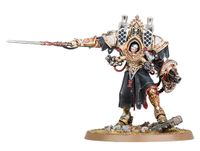