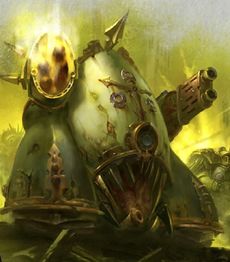 Myphitic Blight-Haulers are a type of light Daemon Engine used by Nurgle affiliated Chaos warbands, most notably the Death Guard.[1]

Resembling a Bloat-Drone that has been stripped of its turbines, this strange machine has heavy weapons mounted on its carapace, typically a combination of multi-melta and missile launcher for mid-to-close range tank hunting. These warmachines are alive, and should the enemy get too close, the Myphitic Blighthauler falls upon them like a ravenous wolf and inject toxic filth with its fangs. Despite its small size the Blight-hauler is well armoured and its blubbery flesh-parts can soak up additional trauma. It possesses a further defence mechanism in the form of the keratinous spouts that protrude from its body. As it devours the filth and corpse-matter carpeting the battlefield, the machine churns the accumulated foulness within. Toxic gasses and fumes build within the Daemon Engine’s boilers until it spews them forth in billowing clouds. The retched stink of these unnatural gasses is enough to render nearby enemies unconscious, or send them into uncontrollable fits of vomiting. Meanwhile, the moistened matter borne upon the clouds hangs thick in the air, veiling the Myphitic Blight-hauler and any nearby units behind an obscuring curtain of filth. In this way, packs of Myphitic Blight-haulers provide rolling smog banks of revolting cover for the Death Guard advance, clogging the air with choking clouds.[1]

Most Death Guard commanders use packs of these Daemon Engines to fill the role that Havocs or Obliterators might in other Traitor Legions. The entities that inhabit Blight-haulers are as loyal as hounds to their masters, rushing to obey any instruction they are given. They are fast enough to keep pace with even the battle tanks of the Death Guard, while their smaller size and all-terrain mobility allows them to advance in even the densest or most difficult environment. When combined with their potent marksmanship, and their ability to wreathe the Death Guard battleline in covering fumes, it is not hard to see why these Daemon Engines are so highly valued.[1]

Though lone Myphitic Blight-haulers are occasionally deployed to support the Death Guard, they are most commonly seen in packs of three, often referred to as tri-lobes. The Daemon Engines bond instinctively with one another, hunting as a pack and running down vulnerable quarry with a killer instinct.[1] 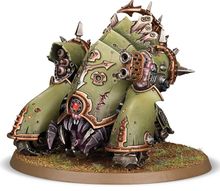