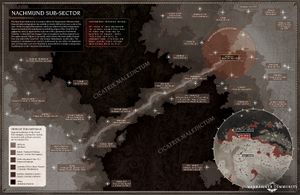 The Nachmund Gauntlet is a region of space in Segmentum Obscurus focused around the Nachmund Sub-Sector[2].

Located near the remains of Cadia and the Eye of Terror, the Nachmund Gauntlet is the only stable route through the dreaded Cicatrix Maledictum, making it strategically vital and a source for huge amounts of Imperial refugees.

Currently, the both the northern and some of the southern end of the Nachmund Gauntlet is under siege by the Forces of Chaos though the Imperial succeeded in holding most of the region.[2] During the Nachmund Rift War almost the entire northern region of the Gauntlet was lost to the Imperium, who now seeks to erect a defensive network known as the Sanctus Wall to block the invasion of the Black Legion under Haarken Worldclaimer. While many worlds north of the Sanctus Wall remain under Imperial control, they are essentially on their own to weather the coming storm.