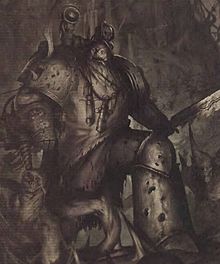 He once served in the Sons of Sorrow Warband, until the Daemon Primarch Mortarion plucked him from obscurity and made Rotbone his personal physician. He now personally sees to the virulence of the plague censers borne at Mortarion's feet and draws the Primarch's Daemonic ichor, which is used in the Death Guard's rituals and rites. Rotbone also listens to Mortarion's embittered rants and is one of the few individuals, who the Daemon Primarch will permit to disagree with his pronouncements or plans. Since being elevated to his current position, Rotbone has become the keeper of Mortarion's surgical dungeons on the Plague Planet and has even led several Death Guard strike forces to gather new genetic samples to help keep their stock of Gene-seed free of taint. All of this has ensured that Rotbone's name has now become infamous to those within the Death Guard and beyond.[1]