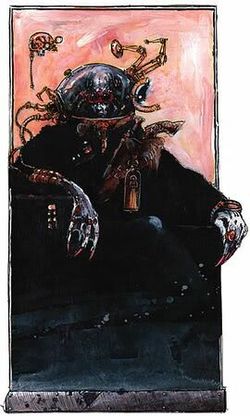 Navigators (Homo navigo[6]) are responsible for guiding Imperial ships through the Warp. They are both a sub-species of humanity as well an organisation (known as the Navis Nobilite), comprised of the various Navigator Families.

Navigators are a very particular form of human mutant, possessing the navigator gene, which gives them the unique ability to navigate through Warp space. This ability makes them absolutely necessary to the Imperium's continued survival. All Navigators have a third eye, commonly called the Warp Eye, on their foreheads, which allows them to perceive the psychic light of the Astronomican, enabling them to fully use their powers in guiding ships through the currents of the Warp. Their ability to sense the tides of the Warp is considered psychic, although Navigators never possess any psychic abilities beyond the powers their Warp eye affords them.[1a]

Navigators possess natural life spans as long as four hundred years. As they increase in age, their abilities increase in power, and their physical appearance changes: the white and iris of the eye gradually disappears, leaving only a hardened black orb. Because most humans fear and mistrust mutants and psykers, navigators are kept safely cloistered from society.[Needs Citation]

Navigators are a sub-species of humanity. Besides the third eye, some Navigators are virtually indistinguishable from normal humans; others possess such extreme deviations that their appearance is utterly alien.[1a]

Mutation or deformity is common among Navigators, although the deviations exhibited are limited to specific traits common among Navigators. Navigators tend to be tall and spindly, sometimes with pale and almost translucent skin. Other common traits include scaly skin, extremely large eyes which may lack the iris, and ill-defined facial features. Hands and feet can be ridiculously large, and are often webbed. Commonly Navigators are completely hairless. Except in the most extreme cases, a Navigator would not possess all these traits[1a]. Those born with extreme mutations might be hidden away or even killed at birth.[Needs Citation] 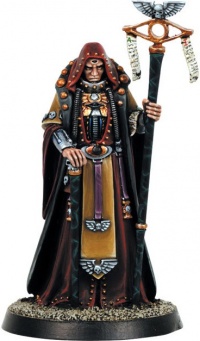 The Navigator sub-species is so ancient their exact origins have been forgotten. What is known is that their origins go back to the Dark Age of Technology in roughly M22[7], to a time of genetic experimentation when many kinds of mutants were engineered to fulfill roles envisaged by their creators.[1a]

The unique powers of the Navigators are passed down through each generation. The navigator gene itself can only be preserved by intermarriage - it is lost when a Navigator breeds with an ordinary human. This factor has led to the development of the closely-related Navigator families.[1a]

The Navis Nobilite is exempt from many Imperial laws, and even the Inquisition tends to be careful in the handling of individual Navigators. However Navigators guilty of treason or something equally serious are hunted down without mercy. Such affairs are many times dealt with internally before the Inquisition has any reason to act.[Needs Citation]

Each family is very close and often very large, and different families are often allied by marriage, while others are rivals.[1a]

The families are organised into Houses and have their own unique traditions and positions dependent upon their own histories. For instance, House Belisarius is led by an individual referred to as the Celestarch and has its own standing military trained by the Space Wolves.[5]

These Houses have four broad categories:

Although individual Navigators are not controlled by the Imperium, every warp-capable craft in the Imperium has at least one Navigator who acts as the warp pilot.[Needs Citation]

Navigators gain a variety of powers from their Third Eye, but by far the most vital one is the ability to steer spacecraft through the Warp. The Warp Eye allows the Navigators to see the currents of the Warp, and using the psychic beacon of the Astronomican as a guide, they are able to direct the ship through the dangerous environment, allowing Imperial ships to make far longer and accurate jumps than otherwise possible. They are the only ones, man or machine, with the ability to do this. Because of this unique talent they collectively hold a vital and powerful position within the Imperium.[Needs Citation]

Of course, the unique ability of the Navigators has its limits also. Outside the range of the guiding light of the Astronomican the Navigators are far more limited in their ability to guide a ship through the Warp. During the Macharian Crusade the grand conquest almost ground to a halt as the sight of the Navigators failed, when they could sense only darkness around them. Furthermore, there are places the Navigators avoid at almost every cost. Navigators will shun the Eye of Terror for thousands of light years around it rather than risk a minor deviation in course which might take them into its boundaries. Most Navigators have personal experience of close encounters with Chaos near the Eye of Terror, and many more can recall the names of others who traveled too close to the Eye in a foolish attempt to cut days from their journey time only to vanish forever.[Needs Citation] 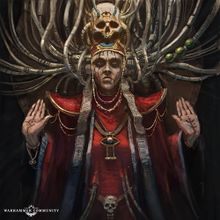 The eye has other powers too, although these are employed far more rarely and are the subject of some mystique. These powers develop with the Navigator's experience of the Warp, so that they are most developed of all in the Heirs Apparent. Navigators are very reluctant to talk about their powers, and it may well be that only the Paternova, leader of all Navigators, understands the full potential of a Navigator's abilities.[Needs Citation]

Not least of the Warp eye's powers is its deadly ability; any one meeting the Warp eye's gaze will be agonisingly killed; mainly due to this Navigators keep their third eye covered with a bandanna or something similar, causing many people to doubt that the "third eye" even exists.[2][3]

The concept of Navigators in 40K is very similar to the Guild Navigators of the Dune universe.