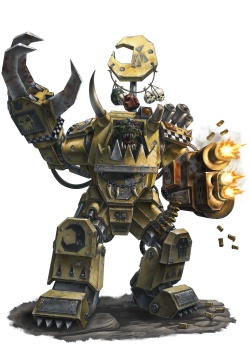 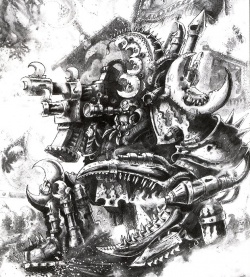 Nazdreg Ug Urdgrub is an Ork Warlord of the Bad Moons Clan.

In many ways Nazdreg is a typical Bad Moon Warlord - rich, ostentatious, over indulgent and overweight. However Nazdreg is remarkable for one reason - he is easily one of the most intelligent and cunning battlefield commanders to be found in all of Orkdom.

It is fortunate for the Imperium then, that Nazdreg is primarily concerned with wealth - for if he ever worked up the energy to lead a Waaagh! he would prove to be every bit as formidable a foe as his contempory Ghazghkull Thraka.[1]

Nazdreg leads an extremely powerful warband which has laid waste to at least 11 Imperial Worlds so far. Additionally he has defeated or outwitted all the Imperial forces that have been sent against him. Nazdreg's base of operations is a huge Space Hulk called Ognazdreg Gargdurslagulk, which has been designated "Scylla"' by Imperial forces. It is said that Nazdreg's Mekboyz have managed to gain some form of control over the space hulk's movement, and the ease with which he has outmanoeuvered his Imperial adversaries would certainly indicate that this is the case.[1] According to Imperial reports, he speaks fluent Low Gothic and is seemingly more resourceful than other Warbosses, using both punishment and rewards as incentives to get more out of his slaves.[2]

Nazdreg takes to the field clad in Mega Armour and he possesses a personal firearm known as "Kustom Blast-X" with which he can be considered an expert shot (by Ork standards).[2]

Prior to the Third War for Armageddon, Nazdreg allied himself with the dreaded Goff Warlord, Ghazghkull Mag Uruk Thraka. The world of Piscina IV suffered a grievous strike from the two allied greenskins, despite assistance from the Dark Angels, though their alliance soon fractured due to their race's naturally aggressive nature. Nazdreg continued to operate throughout the war from the Scylla, until his forces were expelled and his hulk apparently destroyed.[Needs Citation]

The Fall of Medusa V

As the campaign of Medusa V began, an Ork-controlled space hulk identified as the Scylla was sighted over the planet. Nazdreg, presumed dead after Armageddon, had rebuilt his forces and embarked on another conquest.[Needs Citation]

Try as they might, a squad of system ships could do nothing to stop the hulk from entering the already congested orbit above Medusa V, and eventually crashing down into Battle Zone Tisiphone, creating a long swathe of destruction that followed its skidding path until it came to rest. Imperial hopes were that the Orks would have died in the tremendous crash, which didn't register for a good amount of time, testament to the anarchy on the planet. This however was soon dashed as Orks began to pour forth from the Hulk and began to attack the surrounding farm communities.

Nazdreg's attacks grew stronger as his Waaagh! grew in strength and attempts to stop him failed. Soon however, Nazdreg's Madboyz began ranting about the destruction of everything. It was only when his Weirdboyz confirmed the coming of the something nasty through the warp did Nazdreg decided to get his hulk fixed and leave the area before they would be trapped and destroyed, stripping every single piece of equipment the Meks could lay their hands on.

However, Scylla was lost in the fighting and Nazdreg's horde was scattered by attacks from both Imperial and Chaos forces (including a "murky pestilence" left behind by Chaos) Nazdreg and his warband, seeking another another way to escape the planet, raided a nearby Imperial facility and commandeered a large bulk freighter, forcing the ship's crew to trick an Imperial battleship into "evacuating them." Nazdreg's current whereabouts are unknown.

Hearing of the War of Dakka, Nazdreg has invaded the Farsight Enclaves in hopes of proving his boyz as the shootiest.[4]