Necromunda is a Hive World in Segmentum Solar, and a major producer of munitions for the Imperial Guard. Necromunda's forges produce lasguns, autoguns, shotguns and boltguns, among other weapons. The planet also levies huge numbers of troops for the Imperial Guard (most notably the "Necromundan Spiders"), as well as other supplies.[15] Necromunda is typical of most hive worlds, its hive cities rife with powerful gangs. 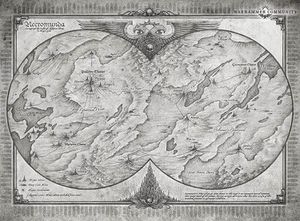 It is rumored that long ago the Piscean xenos race were the first to arrive on Necromunda, which at the time still had large oceans. It is said they were both cunning and violent and viciously resisted Humanity's conquest of Necromunda years later. According to the legends of House Delaque, the Pisceans vanished shortly before Necromunda became consumed by industry and war. The Delaque believe the Pisceans did not leave Necromunda but instead took refuge in the subterranean oceans near the planet's core as Humanity first began to arrive.[13]

Necromunda was founded 15,000 years ago as a mining and manufacturing colony. It had previously been the capital of the Araneus Continuity, a small empire of Humans ruled by Techno-nobility. After the Continuity surrendered during the Great Crusade, the remnants were attacked by unknown Xenos arriving without warning from the system's Warp Gates, leaving only the capital Araneus, which was then renamed to Necromunda [4]. In M30 the planet was liberated from an Ork presence by the Imperial Fists, establishing the close ties between Necromunda and the Chapter.[3][7e] According to another point of view, it was not Orks but rather a brief defiance of the former Necromunda's human colony against the coming of the Imperium that unleashed a war that made ash wastes from where hive-cities rise.[6] Necromunda was apparently devastated during the Horus Heresy, and the Ironhead Squats were vital in rebuilding the planet.[25] The ensuing millennia have not changed its basic purpose very much; Necromunda is still a world of mines, factories, refineries and processing plants. The planet is a vast powerhouse of industry, making thousands and thousands of different items for use throughout nearby planetary systems.[Needs Citation]

Nothing which can contribute to the planet's output has been left untouched. From the tops of the highest mountains to the depths of the oceans, the wealth of Necromunda has been ripped out. Mountains have been reduced to rubble for the ore they contain; oceans have been turned into little more than chemical sludge ponds. The once fertile plains have disappeared under huge urban developments of great housing and factory blocks, forming new ranges of man-made mountains as tall as the long-since flattened natural land features. These huge towering urban complexes are known as city hives, or simply as hives, and their individual peaks or towers are called city spires or spires. A close group of hives is known as a hive cluster. Between the hives, industrial ash deserts cover the planet's surface with a mobile, corrosive skin. Over this desert lies a cloud layer of airborne pollution, so that the great spires of the city hives rise from a drifting mist of tainted vapour like islands out of the sea.[Needs Citation]

Despite being reduced to such a hellish state, Necromunda is still a valuable world to the Imperium. Although little of Necromunda's original resources remain, the waste-heaps of previous generations have become a new source of riches. Necromunda lives on the accumulated wastes of its past: its people have learned to scavenge, reclaim and recycle everything in order to squeeze a living from their exhausted world. Necromunda's population has increased well beyond the planet's capacity to support it. As a consequence it is wholly reliant on synthetic and imported food. Each hive has its recycling plants which convert used organic matter into synthetic food. Real food is imported from off-planet, but is an expensive luxury which only the most wealthy and prestigious Necromundans can afford. There are probably more people on Necromunda than have ever lived in the entire history of Terra up until the end of M2. An attempted census of Trazior Hive four thousand years ago revealed an estimated population of a billion in the upper habitation levels alone – no further attempt has been made to count Necromunda's population in Trazior or any other of the several thousand hives on the planet.[Needs Citation]

The planet's capital is Hive Primus (also known as the Palatine), one of Necromunda's many hive cities. The hive, the largest on Necromunda, is enormous in size, reaching from the surface to some 10 miles into the air, and from surface level to roughly 2.8 miles into the ground (although only the first 1.3 miles are habitable by humans), and possesses a population greater than some worlds. Hive Primus, and the planet as a whole, is ruled over by Lord Gerontius Helmawr of House Helmawr. The Hive's Houses are in a constant struggle to gain power and control of the Hive.[Needs Citation]

In the aftermath of the Great Rift's creation during the Thirteenth Black Crusade, a world-wide rebellion broke out on Necromunda. However it quickly ended sometime later, once word reached the Hive World that Lord Commander Roboute Guilliman's Indomitus Crusade was soon arriving to put down the rebellion.[5]

The society of Necromunda is reasonably typical of larger Hive Worlds. No attempt is made to enforce central administration upon the entire population; indeed such a thing would prove impossible on a world where most people remain unrecorded by any authority. Instead, a kind of feudal system has evolved by which individual people owe loyalty to others, who in their turn owe their loyalty to other increasingly more powerful members of the hierarchy. Among the more stable elements of the population these loyalties are owed on a family basis, and closely related families all support each other under the hegemony of the most powerful member of their family group.[Needs Citation]

This form of urban feudalism tends to be self-regulating. Weaker clans naturally seek the protection of more powerful neighbors whose powerbase then expands until it reaches the limit whereby its numbers and resources are simply too few to allow it to expand further. Where rival clans meet it is inevitable that their power will be tested in combat, the ability of a clan to exert its power being the only true measure of its influence. The endless feuds between the warrior gangs of these clans are a fundamental part of the workings of Necromunda.[Needs Citation]

Like most Hive Worlds, Necromunda is home to huge amounts of crime. It might appear that large swathes of Necromunda are anarchic and lawless. This, however, is not true. Necromunda exists only because of its adherence to an ancient canon of rules laid down by the first true lords of the Helmawr line. These know now that if Necromunda is to survive, it must be allowed to war with itself. The Great Web of Necromunda must remain intact, facilitating the murderous competition that drives the houses to ever greater heights of productivity while at the same time, inter-house conflict is restricted to the proxy wars fought between gangs. But the balance between sanctioned violence and true anarchy is a fine one, preserved by institutions such as the Palanite Enforcers. There are however crimes not ignored by Imperial technologies, such as Heresy or engaging in A.I. research. These crimes are often dealt with the Adeptus Arbites as opposed to local enforcers.[9b]

Likewise, there are those who are not content to merely rob settlements or Guilder caravans without the benefits of a Clan House blessing. These nefarious souls are the true criminals of Necromunda, and their crimes are crimes not against the decency or morality of human existence but against the absolute authority of the Houses themselves.[9b]

The great criminal houses of Necromunda consist of:[10]

The hive cities of Necromunda retain the ancient names of the cities and settlements from which they grew. There are several thousand Hives on the planet, some massive and populated by billions, while others are desolate and inhabited only by the dead.[7a] Each hive spire is also known by a local name. There are approximately a thousand hive clusters on Necromunda; each cluster is a group of up to a dozen or so individual hive cities, all linked by a network of overground travel tubes and subterranean passages.[Needs Citation] There are several thousand hive cities on Necromunda, some big and vast in scale, some decrepit and lost.[6]

Known Hives and notable locations on Necromunda include:

Necromunda is one of two official recruiting worlds of the Imperial Fists Space Marine Chapter, along with Inwit.[2] The Fists are based from the Spear of Dorn Fortress.[8]