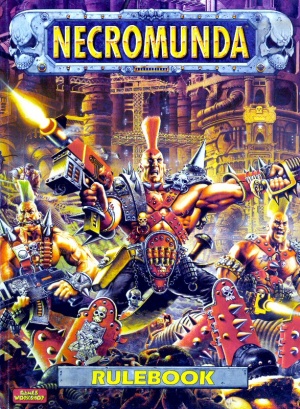 The Necromunda Rulebook contained the rules needed to play individual games of Necromunda. Included in the first edition boxed set (1995), it was accompanied by the Sourcebook which contained background to the planet as well as the rules for making gangs, playing scenarios and linking games into campaigns.

Fanatic released a second edition of Necromunda, entitled Necromunda: Underhive, which was essentially a combination of the Rulebook and Sourcebook with a few updated rules (such as removing the need for sustained fire dice and hand flamer templates, and making House specific weapon lists). Necromunda: Underhive was also published online in a "Living Rulebook", still available to download from the Games Workshop Specialist Games website.