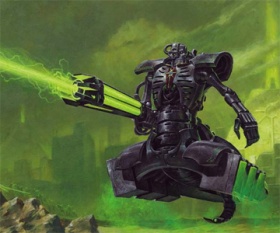 Lokhust Destroyers are Necrons fused to floating chassis which serve as heavy weapons platforms.[1a][1b] Essentially a modified Immortal, Deathmark, or Lychguard who have given up their physical forms in pursuit of destruction, these deranged agents of annihilation see their sole existence as quenching the flames of life. A Destroyer cares not for borders of allegiance, considering all forms of organic life to be its prey.[2]

Lokhust Destroyers are members of the Destroyer Cult, which is known for its rage and favor in destroying the enemy from afar.[3]

While many Necrons long for a return to their organic state, Lokhust Destroyers have thrown that dream away in order to pursue the all-important goal of annihilation. They ruthlessly adapt, augment, or expunge any facet of their physical form in order to better their combat capacity. Even the Destroyer's senses are reconfigured to better serve target lock and prediction capability, its neural circuitry repathed to improve response times at the cost of emotions. Destroyers will still flee before an enemy, seeing retreating as a form of self-preservation rather than base organic fear.[2]

Lokhust Destroyers are found on every Necron Tomb World, suggesting that the descent into this particular form of madness is driven by subconscious imperative - possibly one implanted by a C'tan. Most Immortals are banished to the outskirts of their Tomb Worlds, dwelling in isolated fortresses ruled over by courts of Destroyer Lords.[2]

In battle, the brutal efficiency of Destroyers more than compensates for their habitual insubordination. Many Necron Lords and Nemesors build campaigns around the actions of Destroyers, rather than making doomed attempts to enforce their own plan on the twisted warriors. So long as a Destroyer knows that there are other forms of life, it will direct its baleful attention upon their destruction. Once the enemy is destroyed, Destroyers pay little heed to their allies.[2]

Lokhust Destroyers are armed with a huge and devastating Gauss Cannon. This heavy weapon is very effective against lighter infantry, though still capable of damaging light vehicles reliably. They are engineered with anti-grav technology, and can easily equal Eldar Jetbikes in mobility, able to redeploy and begin firing again within a matter of seconds.[1b] 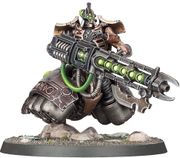 Lokhust Heavy Destroyers are larger, more powerful versions of standard Necron Destroyers. They primarily differ in that the power generating spine is much more pronounced, providing the construct with enormous power for its heavier weaponry. Operating in squads of one to three, they are also equipped with special targeting mechanisms to enable them to hit the weakest point of any enemy they face. They are as nimble as the Necron Destroyer and can redeploy and open fire in a matter of moments.[1c]

The upper limbs of Lokhust Heavy Destroyers are bound into Gauss Destructors or Enmitic Exterminators which can devastate the foe from afar.[5]