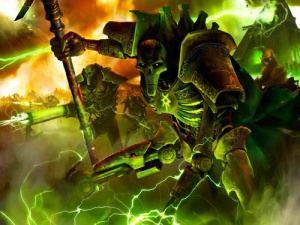 The Necron Lord of Kronus[5]

Necron Lords are leaders of Necron armies that serve under Overlords and rule over individual Tomb Worlds.[1]

Taking orders from their Overlord, Necron Lords direct battles and oversee the functions of the Tomb World as part of the Royal Court. Often seen wearing crumbling vestments and wielding ancient and arcane staffs, they are a chilling sight on the battlefield, filling their foes with dread. Though age mars and chips at their once-perfectly silvered forms, time has not diminished their malice. To further unnerve the enemy, they direct their forces to attack in eerie silence and have glittering arcs of energy surrounding the soulless fires that burn in their empty eye sockets.[Needs Citation]

The basic armament for a Necron Lord is a Staff of Light, but this is sometimes upgraded to a Warscythe, Hyperphase Sword, or Voidblade.[3] Necron Lords are also known to go into battle with Resurrection Orbs.[3] In cases of succumbing to the madness of the Destroyer Cult Necron Lords can be found mounted on a Destroyer Body chassis, becoming Destroyer Lords. [3]

Necron Lords in the 41st Millennium

Necron Lords serve in the courts of powerful Necron Overlords or Phaerons, often ruling over individual Tomb Worlds on the behalf of greater Necron Dynasties. A Necron Overlord can sometimes have many Necron Lords at his command. Despite this, however, a Necron Lord is a fearsome opponent in his own right and they themselves command vast legions of Necron forces.[1]