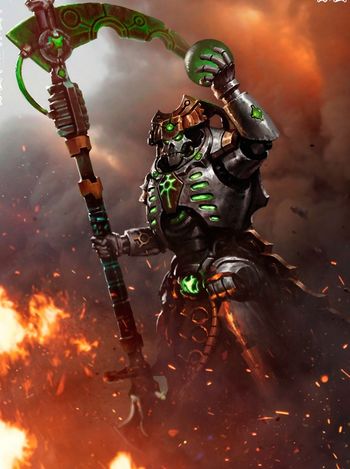 Necron Overlords are the highest and most powerful of the Necron race, ruling many Tomb Worlds.

More powerful than even a Necron Lord, at its command are uncountable legions of Necron Warriors, terrifying war machines, and a vast array of devastating weaponry. Normally equipped with a Staff of Light, Necron Overlords are brilliant strategists, capable of calculating every possible outcome in the ensuing conflict and formulating strategies to ensure that everything goes to plan. Only the most unlikely situations can outfox him and only the most potent foes have any chance of beating him in combat. The most powerful Necron Overlords are those that rise to the rank of Phaeron, ruling over an entire Sector.[1]

Overlords are aided by powerful aid-de-camps known as Royal Wardens[7] They are equipped with a variety of weaponry and equipment which include a Warscythe, Staff of Light, Hyperphase Sword, Voidblade, Resurrection Orb[8], or Hyperphase Glaives.[7]

Phaeron is a rank of especially powerful Necron Overlords and thus are in effect the most powerful of the Necron race. Commanding an entire Necron Dynasty which includes vast empires of Tomb Worlds, a Necron Overlord who has risen to the rank of Phaeron rules over an entire Sector and has a court of lesser Overlords to do his bidding.[1] Perhaps the most well-known and accomplished Phaeron in M41 is Imotekh the Stormlord, who rules over the eighty Tomb Worlds of the Sautekh Dynasty.[2] 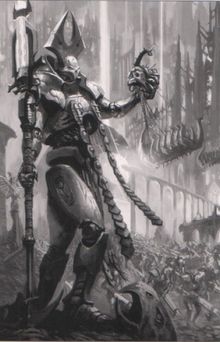