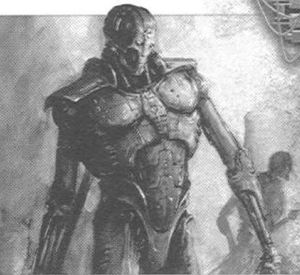 Necron Pariahs are a symbiosis of Necron technology and human evolution, representing the next stage of the C'tan ideal for the galaxy.[1a]

Necron Pariahs are crafted from the symbiosis of Necron technology and human evolution, specifically those carrying the Pariah Gene. Pariahs resemble artificial beings, radiating a sense of menace and horror to those nearby. Due to their soulless nature, Pariahs blot out psychic emanations and infuse those around them with a sense of their own mortality. Representing the next phase of the C'tan ideal for the galaxy, Pariahs embody the ultimate horror of the Necron threat.[1a]

A Necron Pariahs, besides their fear-inducing and anti-psychic abilities, are armed with with Warscythes with built-in Gauss Blasters. However, being a symbiosis of flesh and Necron technology, they are not true Necrons. Therefore, they do not possess living metal skin the Necrons do, nor do they possess the ability to revive through resurrection protocols.[1a]

According to Eldar legend, after the War in Heaven, the lesser creatures of the Old Ones (such as humans) had developed in unforeseen ways. While the Eldar let the humans be, perhaps reluctant to harm what little life was left after the War in Heaven, legends state the Devoured Ones had sown a terrible crop. Now that these crops have grown to fruition, the harvesters were being readied.[1b]

It was shortly after the Horus Heresy the Magos Biologis had stumbled upon signs that the Pariah Gene, the signature gene of the Culexus Assassins, had been tampered with eons ago. Rather than purge them, a sect within the Inquisition allowed them to thrive, making these Culexus Assassins effective weapons against heretics and aliens.[3] The first of the Necron Pariahs was one such Culexus Assassin. It was visited by a vision of itself upon an obsidian platform, feeling a schizophrenic mix of being home and something being wrong. There, its Star God ordered it to travel northward and join with the Necrontyr for its final transformation. Upon making its journey, the Ordo Xenos assembled a task force to capture the fallen Pariah.[3]

During the N'Kele Massacres of 785.M41, the Necrons had captured a group of women and children in a barn. A Necron Lord singled out an unlucky child named Ghara, whom the other children crawled away from. Rather than kill her as the Necrons have done to everyone else, she was merely held tightly and covered in the Necron Lord's shroud. The Necrons then proceeded killed everyone else they could find before departing the world.[4]