"Wit is not required in my vassals; they need only the ability to fight and die in the furtherance of my boundless glory. Only the most merciful and beneficent of rulers would spare their subjects from the burden of independance, do you not agree?"
- Thaszar the Invincible, Phaeron of the Sarnekh Dynasty, Supreme Warbringer of the Crownworld of Zapennec.[1b] 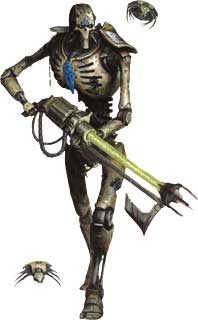 Necron Warriors are the basic troops choice for the Necrons, forming the cold heart of a Tomb World's forces.[1b]

Warrior phalanxes come in large numbers; a squad is made up of between 5 and 20 Necron Warriors armed with Gauss Flayers.[1c]

At the time of biotransference, there were not enough resources to allow every member of the Necrontyr species to inhabit strong, intelligent bodies.[1a] As such, the leaders and nobles of Necron society received highly-advanced bodies, physically powerful and capable of retaining every nuance of their personalities.[1d] Their most trusted servants (Such as the Lychguards[1e]), received new bodies of similar quality. Soldiers received bodies that were merely adequate. The everyday citizens of Necrontyr society received the leftovers; comparatively primitive bodies that almost served as prisons: these, now the Necron Warriors, are incapable of feeling almost all emotion, and retain little sentience.[1a] It was a given that the civilian necrontyr would not receive the same care as their betters during biotransferrence, but it is possible that this mental degradation was intentional: all the better for the nobles to command their servants and receive total, unconditional loyalty.[1b]

With their limited mental capacities, Necron Warriors require constant instructions. Without the will of their commanders to provide guidance, a Necron Warrior will revert to a guard routine, repelling enemy attacks with precise volleys. What they lack in initiative, though, they make up for in determination: once issued an order, a Necron Warrior will not stop until it either is slain or carries that order through to completion. Their innate durability ensures that the task will be done, for the Necrons are implacable foes that will continue to fight through otherwise-lethal injuries, recovering from dismemberment and even decapitation in a matter of minutes. Necron Warriors are not entirely fearless: most of their natural emotions were purged during biotransference, but self-preservation remained. This instinct, though, is not always ensured to activate: a Necron Warrior’s connection to reality is tenuous, and the true danger of the task before it might not register. If this is the case, then the Warrior will continue fighting, oblivious to peril, and marching through enemy gunfire or minefields that would see it destroyed. However, when it dies, a Necron Warrior emits a high-pitched scream; an anomaly, for all other forms of verbal communication were intentionally removed during biotransference. It is unknown if this noise is the death-scream of a being realizing that it is about to descend into oblivion, or, more pragmatically, if it serves as a warning to nearby Necrons, alerting them to a danger.[1b]

Though a Necron Warrior still remains a terrifying soldier in M41, closer inspection reveals the toll that age and countless battles have inflicted on it. Its limbs, though strong, are corroded and worn, covered in fluids leaked from their joints. Though precise, they are slow. Their movements are jerky; the result of misfiring synapses. It would almost be a pitiful sight, were it not for the malign gleam to its eyes that reveals its merciless nature.[1b]