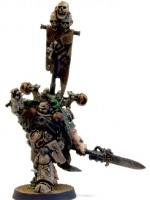 Necrosius is a Sorcerer of Nurgle and the leader of the Apostles of Contagion.[1]

Once an Apothecary in the Death Guard Space Marine Legion whose true name has long been purged from all records, when the Legion's fleet was lost in the Warp and invaded by the agonizing diseases of the Chaos God Nurgle, Necrosius eventually turned to the Plague God himself for salvation along with most of his Legion. Embracing the service of his new God, Necrosius cast aside his past role as a healer and gave himself to the pursuit of Daemonic sorcery. With the zealous conviction of a true convert, Necrosius quickly gathered a following among others in the Death Guard and these disciples became the first Apostles of Contagion.[1]

Soon, Necrosius and his Apostles parted ways with the Death Guard and went on their own, spreading disease and walking death wherever they went, heedless to whom they brought their blighted 'gifts', be they servants of the Emperor or followers of the Gods of Chaos. As a result, he and his Apostles have made many enemies. They have participated in atrocities in the millennia since the Horus Heresy. Supposedly dispatched by both Imperial assassins and rival Chaos Space Marines such as the Sorcerer Ahriman, Necrosius has survived each ordeal and reemerged, earning him the nickname "the Undying".[1]

Necrosius would later appear during the Siege of Vraks, leading his Apostles of Contagion once more against the forces of the Imperium.[1]