The Nekthyst Dynasty is a Necron Dynasty. 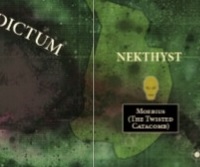 During the Necron Wars of Secession, the nobles of the Nekthyst Dynasty earned reputations as betrayers and traitors when their Phaeron Oblis the Enslaver angered the Triarch by refusing to adhere to their decrees. Thus, when the Nekthyst crownworld of Moebius was assaulted by Orks, the Triarchs refused to send aid. Though the Orks were repelled, Moebius was devastated along with much of the Nekthyst empire.[2]

Since that day, the Nekthyst have shunned the concepts of honour so prized by the rest of their kin. They fight ruthlessly to preserve their shattered domain, using any and all methods - including the underhanded - to achieve their aims. As a result, the Nekthyst are seen by other Necron dynasties as little more than untrustworthy savages.[2]