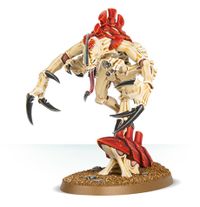 Nemesis 9 Tyrantis is a Genestealer Broodlord that the Inquisition has identified and named on the Imperium world Vigilus. It preys on the world's population, but prizes terror so highly that it leaves one victim alive from each of its attacks so they might spread their fear to the common herd of Vigilus like a virus. Nemesis 9 Tyrantis has on more than one occasion been mistaken for the leader of Vigilus's Genestealer Cult infestation – however, so long as the Broodlord gets to feed on the minds and bodies of the populace, it cares little for the chatterings of ambulatory biomass.[1]