Nemesis force weapons are the characteristic type of Force Weapon of the Grey Knights, and take the form of swords, axes, halberds, maces, and hammers. Nemesis force weapons house a psi-matrix attuned to the unique psyche of its owner. The power of the weapon itself directly corresponds to the psychic talent of the wielder. In its original version, the haft incorporated a bolter weapon, similar to the Adeptus Custodes' Guardian spear; on newer models of the Grey Knights the bolter is a wrist-mounted storm bolter, incorporated into the Knight's power armour itself.

The most common type of weapon wielded by the Grey Knights is the Nemesis Force Sword. It exemplifies the mixture of magick and science utilized by the Grey Knights. The blade is tempered iron, flecked with shards of silver and inset with ancient runes of daemon slaying. Advanced power field generators are also contained within.[1]

A Nemesis Halberd is a two-handed weapon that consists of a long adamantium haft with an iron and silver blade set upon the top. This extra reach often allows a Grey Knight to land a fatal blow, killing the enemy before coming within reach of its weapons.[1]

The Nemesis Daemon Hammer is much like the Thunder Hammer used by most other Chapters, but combines the crushing power with magicks of destruction. Few enemies can survive a single blow.[1]

Unlike most of the Nemesis Force Weapons used by the Grey Knights, the Nemesis Warding Stave has abilities used in defensive situations. The wielder of the stave can channel his psychic might into the haft to activate the refractor fields within. The refractor fields, once activated, then project a force field around the wielder, softening any blows and thus increasing the chance for retaliation.[1] 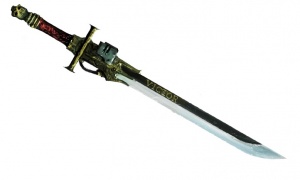 Wielded in a pair, Nemesis Falchions are smaller variants of the Nemesis Force Sword. By triggering the circuitry within each Falchion, a Grey Knight can swing the Force Weapon with incredible speed, striking several blows with pinpoint accuracy.[1]

The power fists of the Grey Knights Dreadnought are augmented with Nemesis circuitry. Although the body interred within the sarcophagus is mortally wounded, his will to fight on alongside his brothers is as strong now as it was before and his psychic might is as formidable as ever.[1]

Only Dreadknights are able to wield the gargantuan size of a Nemesis Greatsword, as no mere Grey Knight could ever hope to wield such a colossal weapon unaided.[1]

This weapon resembles the huge sword psychically attuned to one arm of the Mk IV Dreadnought. It is one of the weapon of the Doomglaive Pattern Dreadnoughts of the Grey Knights. It is a best weapon to confront large hordes of enemies, its cunningly articulated mount and long blade proved to make a devastating scything strikes.[2]