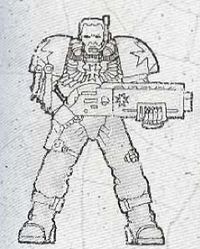 Neophytes are those humans who undergo the process of becoming a superhuman Space Marine. Before they undergo the transformation, they are called Aspirants.[1]

In most Codex Chapters, Neophytes are formed into Scout Squads, until they are promoted to full Space Marine status. Even though it is a long and painful process, requiring the most brutal training and the receiving of implanted organs, it is a process that is undergone willingly for the defense of the Imperium.[1]

Uncharacteristic of a Codex Chapter, Black Templars Neophytes are employed as frontline soldiers rather than being used as a separate Scout Company. They attain the rank after completing their grueling training as an Aspirant and are given an Initiate as a tutor. Under the care of their Initiate superiors and acting as their squires, Black Templars Neophytes are deployed in Crusader Squads. Towards the end of their tutelage they may be assigned to a typical Scout formation by their Initiate, and only once they have passed many such trials will they be proclaimed by Chaplains as worthy to ascension as an Initiate.[5]