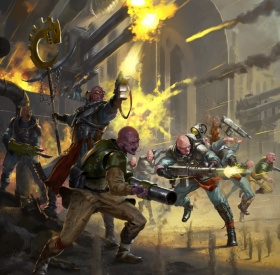 Neophyte Hybrids are a type of Genestealer Hybrid. They appear during the 3rd and 4th generations of infestation.[1]

Neophytes form the line troopers and greater bulk of a Genestealer Cults armies. The mental and spiritual bond of the cult is so powerful that they are more than happy to hurl themselves into suicidal attacks or give their lives in exchange for their elders’ survival or the Cult's greater ambitions. Neophytes also serve as fine laborers, capable of toiling endlessly without complaint.[1]

Hybrids of the third generation are still markedly alien in aspect. Though they have a classic bipedal anatomy, their distended craniums, beetling foreheads and waxy pallor mean they are often seen as mutants, and are hence shunned and persecuted by the greater masses of the Imperium. Those of the fourth generation find it far easier to pass for human. Inveigling themselves into worker gangs, Administratum facilities, manufactorum shifts and hive networks, they slowly and carefully spread the cult’s influence through the strata of society. Mining workers and militia fighters find it easy enough to secure low-grade weapons, either stealing them from those victims they silently take down or securing them on the black market. Over time, they amass a primitive arsenal of Auto Weapons, blasting charges and pistols with which to wreak havoc.[1]

It is common for a later cycle’s Neophyte Hybrids to infiltrate a world’s PDF, or even those Imperial Guard regiments founded from amongst its populace. There, they work alongside the infected humans that have felt the Genestealer’s Kiss to ensure the cult’s sympathizers spread ever further. The Neophytes propagate slowly throughout the ranks of the local military, taking over each corps from the inside until all of its soldiers pay obeisance to the Patriarch. These professional warriors carry Munitorum-issue lasguns instead of autoguns, and use frag grenades in place of repurposed mining explosives. Some even have access to heavier weaponry and may hijack the famously indomitable vehicles of the Imperial Guard to their cause. The foot soldiers of the cult may well fight in the Imperium’s wars, defending their homes from the forces of Chaos and other xenos species. In doing so, they defend the cult and all that it has worked to achieve. Bound by the ties of the brood and a surety of common purpose, they make determined and capable warriors, but this only makes it all the more horrifying when their true nature is revealed.[1]