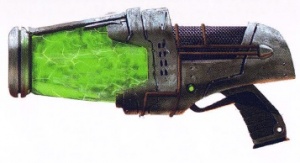 The Neural Shredder is a barely understood piece of technology employed by the Imperium and Eldar Corsairs.[2]

As a weapon it does not damage its target in the conventional sense. Nor can it be "targeted" at a specific enemy. Rather, it projects a wave of electromagnetic energy in the direction of fire. This wave is of the same frequency of the central nervous system, overloading brain and nerve receptors resulting in rather catastrophic effects on the creatures within the area of effect.[1] Symptoms undoubtedly range from seizures and convulsions, leading to unconsciousness or even death. As a consequence of its rather specific design, the Neural Shredder is obviously useless against unliving material such as equipment and vehicles, though it passes directly through such objects as if they were not there. Therefore armour is of no protection against a neural shredder, neither are the operators of heavily plated vehicles, or the inhabitants of buildings.[3]

The Neural Shredder is a rare and exotic weapon rarely seen in the galaxy, but it is a common armament of Officio Assassinorum agents trained by the Callidus temple,[3] though it can occasionally be seen in the hands of other individuals resourceful enough to acquire one, such as members of the Inquisition.[Needs Citation]

During the Great Crusade the Dark Angels were known to utilize Neural Shredders from the rebel Forge of Tyrhenius.[4]