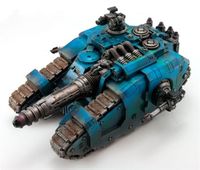 A Sicaran Venator with a Neutron Laser Projector

The Neutron Laser Projector is a powerful and rare weapon used by the Imperium. Mounted on Valdor Tank Hunters, Sicaran Venators, Sabre Strike Tanks, and Cerberus Heavy Tank Destroyers. It is a relic of the Dark Age of Technology.[1] Despite the name, it is not a laser - it shoots neutrons at the target, not photons.

These little-understood and highly unstable weapons emit powerful blasts that outmatch any other Imperial weapon of its size.[2] The projector fires a neutron beam capable of destroying even the densest material by explosive matter disruption, smashing apart the target's molecular structure and creating a massive electro-magnetic shock-pulse which can disable electronic systems[3] while the penetrating radiation disrupts any biological matter[5], though this effect works only against vehicles which lack the thick shielding and protective mass of Super-Heavy Tanks. While this makes the weapon perfect for tank-hunting, the neutron beam's unique nature means that if it fails to transfer its energy discharge entirely to the target vehicle, a dangerous feedback loop can cause damage to the weapon itself. The neutronic-coil arc-reactor which powers the weapon is also inherently unstable and, without the necessary reactor shielding, can be hazardous to operate.[3]

In times of the Great Crusade and Horus Heresy this weapon was also installed on Sicaran Venators tanks[4] and Sabre Tank Hunter[6] though even then its systems and principles were barely understood by Tech-adepts.[5]

The Neutron Blaster was a variant of the larger Laser Projector mounted on Sabre Strike Tanks. Constructed in the same manner as the larger neutron cannon employed by the Sicaran Venator, the intense radiation emitted by the capacitors and charge packs of the cannon is so deleterious that it will eventually degrade the Sabre's own control systems.[7]