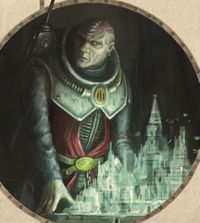 A Nexos is a type of Genestealer Hybrid that is a consummate strategist. By analysing and interpreting every subtle ebb and flow of battle, they can identify vulnerable positions for their kin to exploit, pointing out potential flanking routes and subterranean passages perfect for arranging sudden ambushes.[1]

While the Primus is a frontline battlefield commander, the Nexos is more akin to a rear echelon officer. Coordinating billions of indoctrinated souls on a planetary scale, Nexi are unique bioforms created by a patriarch to undertake the organizing and execution of full-scale uprisings. These creatures are imbued with a fraction of the cerebral might of a patriarch, which allows them to act as the central nervous system of a cult. These gifts give them strange, psychometric powers that allow them to absorb the memories and consciousnesses of indoctrinated organisms, processing the sensory data into a steady stream of strategic instructions and deployment orders. By laying their hands upon the skin of a creature with genestealer taint, a nexos can absorb their genetic memory to the extent that they can see the subject's entire life. Such is a nexos's formidable cerebral power that they can compartmentale millions of these mental imprints inside their brains, building an incredibly complex three-dimensional view of the battlefield once those it has absorbed take the field. However, this process is draining for both the subject and initiator, for the human body is not meant to channel such potent neural processes. As a result, the Nexos is physically worn and strained.[2]

By analyzing and interpreting every subtle ebb and flow of battle, a nexos can identify vulnerable positions for their kin to exploit, pointing out potential flanking routes and subterranean passages perfect for arranging sudden ambushes. Enemy commanders - especially those in the Imperial Guard - all too often dismiss cultist uprisings as disorganized mobs of rabble, unable to glean the true cunning of their foe's actions. All the while a nexos will dwell hidden, issuing orders from across the battlefield via a Vox.[2]

In battle, nexi rarely emerge from their hidden lairs unless they require a first-hand view of the engagement or to absorb the memories of enemy troops. In a rare situation where they are directly confronted with the enemy, they call upon squads of genestealer hybrids and aberrant bodyguards.[2] 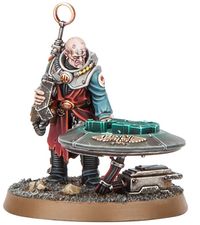