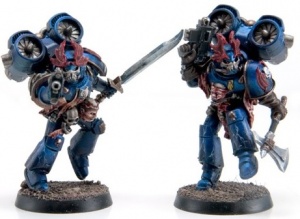 Night Raptors were specialized fast attack infantry of the Night Lords during the Horus Heresy and Great Crusade.[Needs Citation]

The Night Raptors were a caste apart from the rest of their legion - not so much a martial elite as a bloody coterie of murderers unified by similar proclivities of terror and warfare. The Night Raptors were equipped with Jump Packs and an array of close combat weapons, all of which they utilized to bring obscene savagery down on their foes in overwhelming onslaughts.[1]

Where the Night Lords wielded terror as a weapon, the Night Raptors rejected all subtlety in favor of bloody direct assaults. They found bleak joy in soaring above the battlefield and swooping down like screaming predators. Like many of the Legion's elite, they adorned their armor with grisly trophies and utilized advanced systems to project images of death upon its surface. These images normally depicted the doom of the Night Lords past victims in an eternal loop, amusing the wearer and stunning the target.[1]