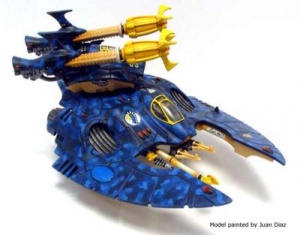 The Night Spinner is an Eldar grav-tank based on the Falcon chassis. One of the most curious and also most accomplished Eldar designs, the Night Spinner is a mobile artillery vehicle designed to provide indirect fire support to fast moving Eldar attacks.[1][2][3a]

The Night Spinner's primary armament are twin-linked Doomweavers, deadly Monofilament Weaponry which launch a large web of deadly wire high into the air. The web is made up of thousands of miles of incredibly strong, monofilament thread that can shear through any substance, including steel or tank armour. Once launched the web floats ghostly downwards, shredding any victims caught beneath it. Upon hitting the ground the web forms a barrier that may dissect anyone crossing through it, but will eventually settle into a solid blanket that can be moved over safely. The Eldar refer to the threads as the Chain of Vaul, after the unbreakable bonds in Eldar legend.[4] The launching of this web will frequently presage an Eldar attack, which on is own can be unnerving to Imperial troops, who fear these attacks more than conventional artillery.[2]

As is true of all Eldar vehicles, Night Spinners are also constructed of Wraithbone and other psycho-plastics sung into being by Bonesingers. This material not only allows the vehicle's crew to control the craft with both body and mind, it also makes it impossible for other races to replicate or operate it.[3b]

In addition the craft is also armed with twin-linked Shuriken Catapults or a Shuriken Cannon, and may be upgraded with Vectored Engines, Star Engines, Holo-fields and Spirit Stones.[2] 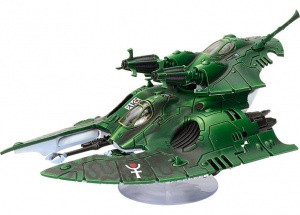 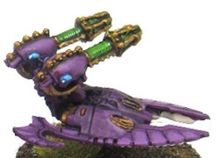