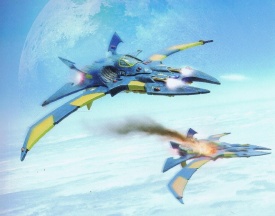 The Nightwing is the primary fighter craft of the Eldar, combining a speed and manoeuvrability that no Imperial or any other aircraft can match, along with considerable firepower and sophisticated energy field protection. An exceptional fighter-interceptor, Nightwings are expected to go into combat outnumbered by the enemy and still establish air superiority, performing maneuvers which would send lesser craft in an uncontrollable plummet and achieve speeds which would tear them apart.[2][3][4a]

The Nightwing is first and foremost a dogfighter; while its weaponry is adequate for attacking ground targets, those types of missions generally go to other aircraft such as the Phoenix.[4a] A favorite tactic of Nightwing pilots is to descend upon an opponent without warning, destroying them, and then using their supernatural speed and agility to shake off any pursuit.[2] It is not uncommon for Imperial Navy Wings operating in airspace contested by Nightwings to suffer losses of 75% in just a few days of combat.[1] During the Chagris Incusion an Eldar sky host known as Lileath's Blade, despite numbering only four Nightwings, accounted for sixty-six destroyed Hell Talons in just the first week without suffering a single loss.[3] While the Nightwing, like all Eldar aircraft, is capable of being deployed directly from orbit, it is more likely to make use of larger Wraithgates to directly get into battle.[2] 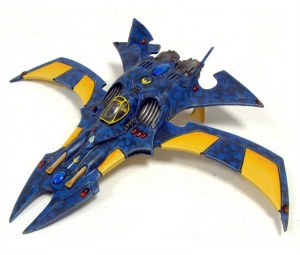 The Nightwing's weaponry is geared towards engaging and destroying enemy aircraft. Twin-linked long-barrled Shuriken Cannons mounted in the nose of the craft, along with twin Bright Lances ventrally mounted beneath the fuselage, give it excellent firepower. The Bright Lances also give the Nightwing respectable anti-tank firepower should the opportunity present itself.[1][3][4a]

As with other Eldar vehicles, the Nightwing relies on speed and agility to avoid damage rather than armour. Assisting it in this regard are banks of sophisticated systems which create a Holo-field designed to hide it from the enemy. Not only does this holo-field make it virtually impossible for enemy scanners and other devices to track the craft, it also throws out distorting visual images to confuse enemy pilots.[3][4a]

Simply put the Nightwing is capable of aerobatic feats which would be physically impossible in lesser craft thanks to the Eldar's mastery of anti-gravity technology, such as a gravity-dampened cockpit to protect the pilot. Its multi-geometric wings can shift in flight to improve the craft's performance: Nightwings have been recorded at speeds of 3,600kph by Imperial forces with wings fully swept back, and though only capable of 2,300kph when fully extended, this allows the craft to perform high speed, high-g turns and easily outmaneuver the enemy in a dogfight. Nightwing pilots will master this ability to switch between the two settings, suddenly breaking to throw off a pursuit and gain an edge during dogfighting.[1][3][4a] This performance is further enhanced by the fact that Nightwings, like all Eldar aircraft, are constructed of advanced psycho-plastics, including Wraithbone, which are attuned to the pilot's psychic abilities, improving response time.[4b]

Nightwing pilots are almost always young Eldar who have yet to travel down the darker Aspect paths, though they often have experience piloting Jetbikes and Grav-tanks. Many of these pilots often go on to walk the Path of the Outcast, and Eldar Corsair bands are often well-equipped with Nightwings to support their raids.[4][5]