The Nihilakh Dynasty is a Necron Dynasty which ventures little outside its own domains. 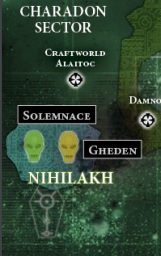 The Nihilakh Dynasty itself is based from the Crownworld of Gheden[1b] under the command of the Phaeron Krispekh.[2] During the ancient past, the Nihilakh built vast treasure worlds filled with the wealth plundered from a thousand lost civilizations. It is said that these treasures eclipse those of all the other dynasties combined, and their armament attests to this. Arrogant and proud, the Dynasty flaunts its wealth and military strength but has become protective of their treasures to the point of isolationism.[6]

Whilst its isolationism is beneficial to alien races, it also carries a peril. Undepleted from wars of military expansion, the Nihilakh viciously act against any interloper. If attacked, they do not rest until the aggressor has been utterly destroyed.[1a] Thanks to the preserved head of an ancient alien prophet, the Necrons of the Nihilakh are able to predict the future and strike at a foe when they are least prepared.[9] Recently, the Nihilakh have ended their policy of isolation and have begun a campaign of expansion from their borders.[2] They have also recently sided with Szarekh, the last Silent King, and hope to oversee Necron domination of the Galaxy.[9]

Since the formation of the Great Rift, the forces of the Nihilakh have begun hunting the forces of Chaos. In addition, they have cordoned off a large Sector of space, forcing billions within to erect geometrically arranged monuments[6]. The Nihilakh Dynasty was among the Necron' forces that defended the Pariah Nexus, during the Psychic Awakening. The Indomitus Crusade's Battle Group Kallides later invaded the Nexus and the Battle Sister Ephrael Stern' forces defeated the Nihilakh garrison on Cherist.[7]