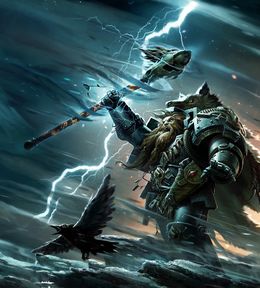 Njal Stormcaller is one of the Space Wolves greatest Rune Priests and is among the greatest Librarians in the Imperium.[1]

Njal Stormcaller's long saga began many years ago upon the cold oceans of Fenris. In ships of wood and skin his tribe put to the sea after their lands sank amidst the trial of fire and water. For many months they wandered the raging oceans of Fenris in search of new lands. After a mighty sea battle they defeated their rivals the Paleskins and took possession of the land born with the turning of the great year. In battle the young Njal fought with such ferocity that not even a full-blooded warrior dare stand before him. Leaping from oar to oar he threw himself upon the enemy ships, clearing the whole decks and casting foes into the engulfing waters. At the battles end he lay exhausted on the deck, a spear point embedded in his breast. The pall of death lay upon him.[1]

Njal's valor would have ended there, doubtless passing into the legends of his tribe, but his bravery had not gone unnoticed. His dying body was plucked from the enemy ship by Rune Priest Heimdall of the Space Wolves and was taken back to Asaheim. There he was trained by Heimdall and became a Space Wolves Rune Priest.[1]

At the Battle of Goreswirl, he earned his name, Stormcaller, by using his psychic talent to blast apart a Bloodthirster that had killed his mentor, and then called up a psychic ice storm that destroyed the whole Chaos Army. Later, after saving the life of the Iron Priest Ulf Schwarzbraur at the Battle of Rust World, he was awarded with his Psyber Raven, Nightwing.[1]

Towards the end of the Indomitus Crusade in the 42nd Millennium Njal Stormcaller was guided by a vision to Prospero, where he discovered forces of the Space Wolves 13th Great Company trapped in a network of portals.[2a] In the ensuing battle Njal was able to rescue most of the heresy-era warriors from Magnus the Red and the Thousand Sons and return to his ship in orbit, ordering that Prospero be purged.[2b]