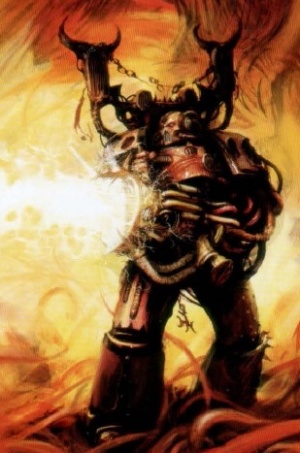 Noise Marines, as they are known, are the dedicated Slaaneshi Chaos Space Marine foot soldiers, commonly found in the Emperor's Children Traitor Legion, and also in other Slaanesh-devoted Chaos Space Marine warbands, such as The Flawless Host.[Needs Citation]

Their trademark is the use of devastating Sonic Weaponry that confuses and demoralizes enemy forces in a wild show of "deafeningly loud, psycho-sonically and pyrotechnically explosive attacks."[1] However, Noise Marines are also physically enhanced by their patron God Slaanesh, giving them heightened senses as well as superhuman hearing.[3]

Noise Marines from the Emperor's Children[11]

The first creation of Noise Marines goes back to the days immediately preceding the Horus Heresy. After the Cleansing of Laeran introduced corruption into the heart of the 28th Expedition Fleet, noted remembrancer Bequa Kynska eventually produced a grand symphony she called the Maraviglia, at whose debut (and only) performance were present several Emperor's Children Space Marines, including Primarch Fulgrim and Marius Vairosean. This performance, inspired and entwined with Slaaneshi powers, not only caused the abrupt daemonic possession of several of the orchestra, but also spurred the audience to engage in an orgy of sex and violence alike. During the "performance" it was noted that the musical instruments were able to produce effects variously disorientating, stimulating and downright murderous. Not long afterwards, during the Battle of Isstvan V, some Emperor's Children marines took to the field armed with these weapons, becoming the first Noise Marines.[2] During the Heresy, these early Noise Marines developed powerful but dangerous psycho-sonic weapons known as Kakophoni.[4]

After the Heresy, the early Noise Marines took their deviant behavior to a new level with their new patron Chaos God and over the years of bloody warfare have honed their bodies into sensory extremes where nothing can stir their emotions other than the din of battle and screams of the dying. The louder the noise or sensation the greater mental reaction a Noise Marine achieves, and on the battlefield he essentially ceases being human but rather becomes a receptacle for the sounds of agony and death.[3]

Noise Marines are quasi-mystics seeing themselves as being one with Slaanesh himself. They add their voices to the Song of Slaanesh (or Ur-Song), a song begun by the Eldar themselves. By adding their voices to those of the dead, the lost, and the damned throughout time itself, Noise Marines take part in a universal choir that transcends both time and space. This song is the same that sang Slaanesh into existence at its beginning, for the song moves both backwards and forwards throughout time. Without the song, Slaanesh might cease to be and without the Slaanesh the song would never have been. Thus all Noise Marines may condemn themselves to lesser, more mundane existences if they fail to add their part to the song.[7]

Some Noise Marines are aloof and apathetic with regards to the infighting that takes place among Chaos Space Marine warbands, sometimes declaring themselves neutral in such disputes. The song of Slaanesh is what concerns them, and they see all other matters as beneath their attention.[7]

The weapons employed by the dreaded Noise Marines use a combination of light and sound designed to stimulate the sensations of both the wielder and the unfortunate victim.[1]