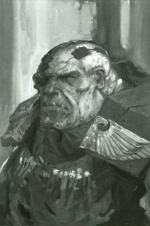 Nork Deddog is an Ogryn in the Imperial Guard possessing enhanced brain power and strength coupled with the loyalty of a Commissar.

By Ogryn standards, Nork is a genius, given that he can write his name (or at least the first initial of it), count as high as four and even speak in short sentences. These are rare (if not unique) achievements in Ogryn development. For this reason, he was taken out of the normal stream of warfare and underwent artificial mental enhancement (possibly the same process used in the creation of Bone 'eads) and was soon training within a special unit[1].

He was then assigned to the 2nd Catachan under Colonel Greiss, fighting on Balur. He was quickly taken as the Colonel's bodyguard, and the sight of the two together became more frequent for the four years the wars lasted. Often they were seen together on the battlefield with Greiss bawling orders and explosive shells bouncing off Nork's dense skull. It is known he has saved the Colonel's life on many occasions, including carrying his wounded body from a disaster at Breakback Hill. When Colonel Greiss was injured during the action, he ordered Nork to retrieve the medi-kit from his Chimera, which had taken damage and was perched up-ended in a drainage ditch. Nork proceeded to drag the Chimera out of the ditch and twenty yards down the road to the injured Colonel because, as he put it, "Da medi-kit is in da carrier, surr."[2]

His reputation for loyalty is unsurpassed and his skills as a bodyguard are in high demand by Imperium officers across the sector. When Ork Warboss Uglurk Gitsmasha and his hardest mob of Meganobz charged an Imperial Guard command dugout, Nork Deddog was the only one to stand his ground beside Sub-overlord Ven Vambold. Nork killed the massive Ork Warlord with a single, extremely violent headbutt that left the remaining Orks totally awestruck and they retreated rather than face the angry Ogryn bodyguard.[2]

Nork has saved the lives of hundreds, if not thousands of officers (and troopers) in battle, earning him a vast range of medals and notability among Imperial Officers. He does not fight for these medals, however, but instead, using both his immense brawn and intelligence, he fights for the satisfaction of his superiors and the Imperium.[1]