The Novamarines are a Successor Chapter of the Ultramarines Legion, created during the Second Founding.[5] 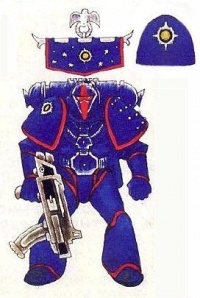 "The existence of the Alien is a problem with but one solution; Extermination. When Mankind is alone in the cosmos, only then will we have achieved our destiny."

The Novamarines are, with one apparent exception, hardline followers of the Codex Astartes, the great organisational work of the Ultramarines Primarch Roboute Guilliman. Their adherence to most aspects of the Codex is so strong that they have drawn the blood of those who would scorn it, as well as being noted as exemplars of Guilliman's writ by other Imperial authorities. This hardline attitude extends to other facets of Imperial thought, with the Novamarines being notable proponents of the monodominant philosophy; deviation from Imperial norms is considered anathema, with a particular disgust saved for xenos life-forms.[5]

The first Chapter Master of the Novamarines was Ultramarines Captain Lucretius Corvo, an officer who won great renown fighting the Word Bearers during the Horus Heresy. Besieged during one particular battle on the world of Astagar, Corvo and his men resisted annihilation for six days, before managing to destroy a traitor Warlord Battle Titan and break out. For this act, Corvo was decorated by Roboute Guilliman himself - this decoration is now a sacred relic to the Novamarines, and is kept in the Fortress-Monastery. [5]

At their founding they were assigned the pre-Imperial Fortress World of Honourum by Guilliman, a world that marked the farthest point the Ultramarines had penetrated into the galactic north of Ultima Segmentum during the Great Crusade, and took oaths to protect the entire Segmentum. Inhabited by a feral people, the Honourum tribesmen selected for Novamarines training take on the quartered colours of the Novamarines- based on Corvo's personal heraldry - and the manners and culture a citizen of Ultramar would recognise as akin to their own. The only notable surface difference between an unplated Novamarine and an Ultramarine is that the Novamarines retain the tribal practice of tattooing their skin, incorporating it into their beliefs as an Emperor-blessed way of armouring their souls, as well as recording their deeds upon their bodies.[5] 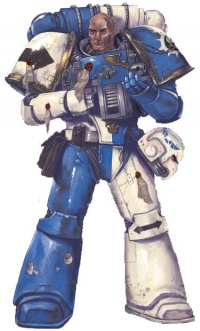 The Novamarines have been involved in many significant conflicts during the 41st Millennium, taking part in combating the emergent Tau life-form, as well as aiding fellow Astartes in the Badab War. During the latter conflict they deployed 2 companies in 3 Strike Cruisers as well as smaller attack vessels and were used in a "fire brigade" role, rushing to aid beleaguered brother Space Marines in small detachments and guarding supply lines. After two years of honourably participating in the war the Novamarines forces withdrew in order to contest an Ork invasion that threatened their homeworld, although some records of the event claim that the Inquisition reassigned them in fear that they would not be enthusiastic enough to be 'in-at-the-kill' of the secessionist forces.[5] Since then they have deployed a large amount of their manpower to aid in defending against the Thirteenth Black Crusade.[Needs Citation]

Novamarines forces were part of the resurrected Roboute Guilliman's army during the Terran Crusade.[15] During the Plague Wars of M42, the Novamarines contributed significant forces to defend Ultramar[12], where they were instrumental in the defense of the star fort Galatan. It was during this battle that they incurred heavy losses, including that of their Chapter Master, Bardan Dovaro, to Typhus.

Since the formation of the Great Rift and the return of Roboute Guilliman, the Novamarines have become one of the 10 Shield Chapters of Ultramar.[20] 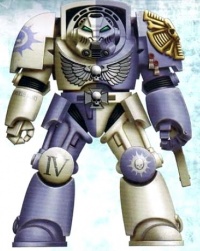 Often thought of as a fleet-based Chapter, the Novamarines still retain Honourum as their Homeworld,[5] near the Halo Stars. Because of their homeworld's location, near a vast zone of unexplored space, the Novamarines fight a wide range of enemies, including isolationist lost human realms, nascent alien empires and ancient threats.[6] But because they swore to defend the Ultima Segmentum at their inception, they looked to expanding their fleet resources significantly. As a result, the Novamarines spend most of their time ranging through Imperial space, watching over the territory they have chosen to safeguard and responding to any Imperial call for aid. Their quick reaction times and willingness to unquestioningly help defend the Imperium have resulted in the Novamarines developing a record of being one of the first forms of aid other Space Marine chapters receive should they ask for it, perhaps most famously in recent times being their defence of Obsidia and the resultant honour-debt sworn to them by the Sable Swords chapter.[5]

The Chapter maintains close links to the Ultramarines and its other Successor Chapters, but the great distance between Honourum and Macragge means that the Chapter is unable to send representatives to the court of Marneus Calgar as often as other Chapters. Still, many Novamarines aspire to make a pilgrimage to the Shrine of the Primarch at least once in their lifetimes, with those that have done such pilgrimage adorning their battle helmets with a laurel wreath, a mark of honour that the Chapter's Scouts regard with awe and dream of one day gaining for themselves.[6]

Novamarines companies are often spread across the segmentum - or further - but the chapter does not allow this distance to result in a deterioration of their traditions and philosophies.[5] The Chapter has very rarely gathered its full strength in one place and the last time it occurred was in the 37th Millennium.[6] Their adherence to the past is such that their heraldry and organisational markings are much the same as they were originally codified at the Second Founding. This of course means that they are very similar to those of the Ultramarines, and the chapter as a whole can be comfortably compared to the Ultramarines in most matters.[5]

This attention to the details of the past also mean that the Novamarines have been able to maintain much of their original chapter armoury in excellent condition. As a result they are able to field their entire 1st Company in Tactical Dreadnought Armour should they so wish, as well as deploy a wide variety of Astartes-pattern vehicles and equipment, as well as significant fleet elements including a (relatively) newly commissioned Strike Cruiser gifted to them by the Adeptus Mechanicus in reward for the securing of STC materials from the Space Hulk Death of Integrity.[5]

The Novamarines also have a notable cadre of Deathwatch veterans in their ranks;[Needs Citation] their experiences purging xenos[6] and proud history of swift, just actions make them a favourite chapter for the Inquisition to draw on for Deathwatch Kill-Teams. The returned Deathwatch marines still have access to any arms and equipment they drew while in Inquisition service, marking them out amidst their brothers.[Needs Citation]

The Librarians of the Novamarines are a notable exception to those proscribed in the Codex Astartes. Precisely how the Librarium functions is unknown, though the atypical nature of its operation is said to be somehow comparable to that of the Rune Priests of the Space Wolves, the Stormseers of the White Scars, and the Librarians of the Crimson Shades. [4]