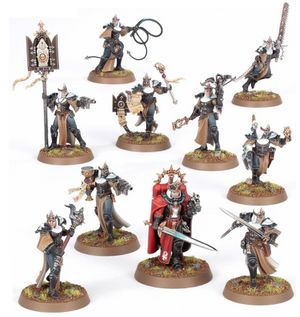 Novitiates are female Progena of the Schola Progeniums, who have been selected to undergo training to join the Adepta Sororitas[1]. These aspirants are then given a Ring of Suffrage to wear and take the Oaths of Adherence, in order to become Novitiates.[2]

Their training is overseen by veteran Sororitas[1], who ensure the Novitiates master the Adepta's fundamentals and this may last a number of years. Even if a Novitiate has already been chosen to serve within a particular Order during that time, their trainers will demand that the Novitiates know the basic skills of all of the Adepta's Orders. This is so the Novitiates can be a tool in the Emperor's hand, to either to cure, learn, counsel or kill.[2]

Even while training, though, a Novitiate may join the Adepta Sororitas on missions, where their training will be on the field of battle. There, the Novitiate's skills and devotion will be tested against the Imperium's enemies[3]. Novitiates are also often selected to join the retinues of Ordo Hereticus Inquisitors, who a Sororitas is asked to join their service. These are likely to be the Novitiates who have proven themselves to be among the most capable and self-sufficient of their class. Those chosen have also been deemed strong enough to endure the rigors and perils of serving with an Inquisitor. The Novitiates who survive such duties, often return to the Sororitas even firmer in their convictions and further honed in their skills. Sororitas that survive long-term duties with the Inquisition, are a very valuable asset for the Adepta in their war against heresy and faithlessness. As a result of this, they are often destined to join the high ranks of their Orders.[2]

Their zeal and go-getting attitudes often mean Novitiates are deployed as kill Team Units, that are commanded by experienced Sister Superiors. Known as Novitiate Superiors, they are charged with steering the faith of their Novitiates and serve as an inspirational example of how a warrior of the Adepta Sororitas acts at all times.[6]