Nurgle is the Chaos God of despair, decay and disease. He was the third to awake of the four Gods of Chaos, fully coming into existence during Terra's Middle Ages, with plagues sweeping across continents in the wake of his birth. His titles include the Plague Father, Fly Lord, Great Corruptor, Plague Lord, Master of Pestilence, Lord of Decay (the translation of his Dark Tongue name, Nurgh-leth)[Needs Citation] [4a][17a] 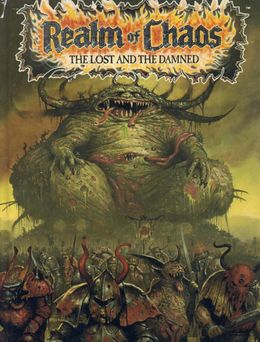 Of the four Gods of Chaos, Nurgle is said to be the most involved with the plight of mortals. Those afflicted by his contagions often turn to him in order to escape their suffering. The physical likeness of Nurgle is described as gigantic and bloated with corruption, with foul-coloured, leathery and necrotic skin.[10a] 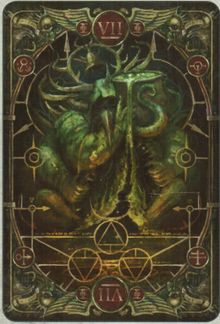 Nurgle can also be regarded as the Lord of All, because all things, no matter how solid and permanent they seem, are liable to physical corruption:

"Indeed, the very process of construction and creation foreshadow destruction and decay. The palace of today is tomorrow's ruin, the maiden of the morning is the crone of the night, and the hope of a moment is but the foundation stone of everlasting regret."[1]

All the Chaos gods are embodiments of the hopes, fears and other strong emotions and concepts generated by the mortal races. In Nurgle's case, the source of power is insecurity, denial, self-delusion and the living's fear of inevitable death and disease, as well as their unconscious response to that fear, which is the "power of life", the motivating power of mankind and other races. Nurgle coaxes new worshippers into his fold by stripping them of any other options, inflicting a spiritual tain upon the populace that is reflected outwardly as disease and pestilence. The desperate, ostracized and dying come to Nurgle to find alleviation from their pain. To these potential devotees, Nurgle provides not redemption from their ailments, but rather comfort within their suffering. Those blessed by Nurgle are granted relief from physical pain as well as a bizarre satisfaction in their depressive state. It is a twisting of a being's perceived reality, turning delusion and denial into truth and acceptance, just as self-respect and vanity turn into monstrous self-satisfaction.[17b][18a][18b][18c]

Nurgle and his daemons, in contrast to their putrid appearance, are jovial and friendly in demeanor. His daemon servants and mortal followers usually demonstrate a disturbing joviality and joy at the pestilence that he inflicts, seeing the plagues as gifts and the cries of their victims as gratitude rather than agony. This is demonstrated on the Daemon World of Bubonicus, where an endless chain of crazed revellers circle the planet's equator in a never-ending dance.[17c]

Nurgle is often referred to as Grandfather Nurgle,[10a] Father Nurgle or Papa Nurgle by his followers because of his paternal nature.[Needs Citation] His main enemy is Tzeentch, the Lord of Change, because their power comes from opposing sources. Tzeentch is hope and ambition, while Nurgle is defiance born of despair and hopelessness.[17b]

Like the other Chaos Gods, Nurgle has a multitude of followers across the galaxy, drawn from all mortal species.

The followers of Nurgle often pit themselves against those of Tzeentch in complex political intrigues, forever attempting to mire his schemes for change with dull-minded conservationisms and parochial self-interest. Their influence is often successful in thwarting Tzeentch, knowing that whatever survives the collapse into entropy becomes theirs.[4b] The church of the Fly Lord is always open to all.[4a]

The armies of Nurgle are collectively referred to as the Plague Legions. Each of these Legions is associated with a specific stage of Nurgle's cycle of decay and regeneration. The Fecundus Legions are tasked with making disease, traveling across the Warp to gather ingredients. The Infecticus Legions are the harbingers of infection, the carriers of new diseases that lay the groundwork for the greater virulence to follow. The Pathogenus Legions are disease fully bloomed and sickness made manifest, equal in both attack or defense and often deployed to guard key sites within the Garden of Nurgle or to spearhead assaults. The Epidemic Legions contain the most Daemons, spreading outward to ensure initial gains turn into rampaging outbreaks. The Rot Legions revel in decay and break down anything and it is their presence more than any other that causes Nurgle's power to swell. The Morbidus Legions are the reapers, tolltakers, and bringers of death. The Necroticus Legions are the most resilient, for they use hopelessness and despair as weapons.[10b]

Each Plague Legion is commanded by a Great Unclean One. Beneath them are Daemon Princes or Heralds of Nurgle that each command one of the Legions seven tallybands. At its peak, each Tallyband is composed of seven packs of Lesser Daemons and Daemonic beasts.[10b]

The Daemons of Nurgle are putrid in appearance and sickening to look upon. Their skin is filled with the fever-heat of corruption, their innards pushing through the lesions in their skin, and their bodies ooze with putrid slime. However Nurgle's daemons are often cheerful, energetic beings that show a disturbingly friendly demeanor, they are jovial in their work and show pride great pride in their achievements.[4b]

A Daemon Engine is a part-technological, part-daemonic vehicle, those dedicated to Nurgle include:

Other Chaos Space Marine warbands dedicated to Nurgle include:

Other Servants of Nurgle

As with all the Chaos Gods, Nurgle will often reward his most favoured followers with special gifts and blessings. Nurgle's gifts can take many forms, including physical mutations, daemon weapons or particularly foul diseases.[8]

The Garden of Nurgle 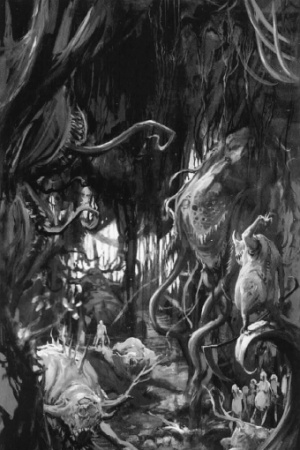 The Garden of Nurgle

The Garden of Nurgle is Nurgle's realm within the Warp. This unwholesome realm is home to every pox and affliction imaginable and is alive with the stench of rot. This 'garden' is not a barren wasteland, but rather a macabre paradise of death and pestilence. A thick sheet of buzzing swarms of black, furry flies litter the sky, and twisted, rotten boughs entangled with grasping vines cover the mouldering ground, beneath an insect-ravaged canopy of leaves. Defiled fungi both plain and extraordinary break through the leaf-strewn mulch of the forest floor, puffing out vile clouds of spores. Muddy rivers slither across the bloated landscape. Nurgle's Mansion of rotted timbers and broken walls resides at the heart of the garden; decrepit and ancient, yet eternally strong at its foundations. It is within these tumbling walls that Nurgle toils at his cauldron, a receptacle vast enough to contain all the oceans of the worlds of the galaxy.[Needs Citation]

Nurgle keeps his companion Isha trapped in a cage in the garden of Nurgle, in the corner of a room where he keeps the cauldron in which he creates all of his plagues. Being a goddess of healing, Isha can cure herself of any of Nurgle's diseases. Nurgle takes advantage of this by force-feeding her his latest creation and sees how long it takes the goddess to overcome its effects. If he is pleased, he releases it upon some unsuspecting world, if not, he starts over, working at his cauldron until he has something new to give to his 'companion'. Whilst he is busy working though, Isha takes advantage of his distraction to instruct mortals on how to rid themselves of Nurgle's poxes.[Needs Citation]

When Nurgle's power waxes, the Garden blooms, encroaching on the lands of the other Chaos Gods. Nurgle's enemies would fight back, and the Plaguebearers would take up arms to defend it. Although the Garden will recede again, it would still have fed deeply on the essence of those who have fallen in such wars, and will lie in gestate peace until it is ready to bloom again.[3]

The Garden of Nurgle contains ravenous creatures such as Feculent Gnarlmaws.

The inspiration for Nurgle comes from the Babylonian god known as Nergal.

This Sources have double-numbers. Proper re-work of this sources needed!