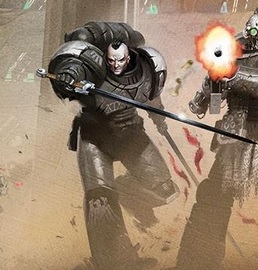 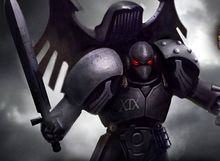 Nykona Sharrowkyn was a member of the Raven Guard Legion during the Horus Heresy. He was trained in "wraith-slipping" and could literally evade light and walk instinctively in shadows, giving him an almost ghost like ability to infiltrate [2b]. He held the incredible accolades of being one of few beings to shoot a Primarch in the head with a Sniper Rifle[2a] and survive, and also besting Lucius the Eternal twice in sword combat.[2d][2e]

He was deployed to Istvaan V with the rest of his Legion and during the Drop Site Massacre was wounded by traitors' bolter fire. After being seriously wounded he was rescued by fellow loyalist legionnaire Sabik Wayland from the Iron Hands Legion. Sharrowkyn and Wayland escaped the massacre aboard one of the Iron Hands' Storm Eagles and joined the decimated remains of the Iron Hands.[2a]

At some point during the Heresy, Sharrowkyn, accompanied by Wayland, was deployed to the Forge World of Cavor Sarta to recover the Kryptos machine. During this mission he killed one of the Word Bearers who was trying to save and hide one of the Kryptos.[1]:

With the Kryptos, Loyalist commanders were able to finally access the Traitors’ coded communications and allowing them to see their arranged meetings. Sharrowkyn remained with the Iron Hands ship Sisypheum and was inserted on to Hydra Cordatus, to intercept the meeting of the traitor Primarchs Fulgrim and Perturabo. After learning of Fulgrim's intentions to enter the Eye of Terror and recover the Angel Exterminatus, he and his partner Sabik Wayland acted as a sniper pair and managed to shoot Fulgrim in the head. The Primarch did not die however, and was healed by Fabius Bile. Escaping two Legions and returning to the Sisypheum, the decision is made to intercede in the traitors plan to acquire the unknown xenos weapon, taking them to the dead eldar world of Iydris.[2a]

After a disastrous experiment on the ships Plasma Reactors by Frater Thamatica[2c], the Sisypheum was boarded by both the Emperors Children and Iron Warriors. This was the first time Sharrowkyn crossed swords with Lucius and bested him in combat, cutting Lucius's face. He was unable to deliver a killing blow as the battle carried them away from each other.[2d] A reckoning then took place on the planet itself, when Nykona sought out Lucius and isolated him before swooping down to attack. Sharrowkyn bested him and plunged both of his gladii through his neck and chest, piercing both hearts, killing him and leaving his cadaver on the planet.[2e] Fabius Bile recovered Lucius's body and he somehow awoke in the Apothecarion - the method of his return to life is not clear.[2f]

Nykona, still part of the Sisypheum's crew, later was part of the strike force that encountered the impostor Shadrak Meduson, who was apparently Alpharius in disguise. During the battle, Sharrowkyn slew the skilled Alpha Legion combatant Ashur Maesan and saved the life of Cadmus Tyro.[3]

Nykona and the Sisypheum eventually managed to reach the Sol System by the time of the Siege of Terra. They received a distress signal from Ta'lab Vita-37 and were drawn into a mission on Luna to rescue the Magna Mater from traitor clutches.[4a] During the mission all of the Sisypheum's crew save Sharrowkyn and Sabik Wayland were slain.[4b] A badly injured Wayland dropped Sharrowkyn off at an abandoned coaling station deep in the void before using the Sisypheum to draw away pursuing traitor vessels. Safeguarding the Magna Mater and with only the Psyber Eagle Garuda for company, Sharrowkyn put himself into a state of hibernation.[4c]