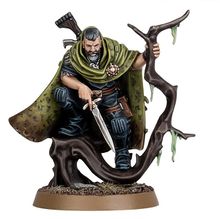 Oan Mkoll was a Scout-Sergeant of the Tanith First and Only regiment from their inception, serving in the Sabbat Worlds Crusade.[1a] In an entire regiment noted for their stealth insertion abilities, Sergeant Mkoll stood out as the exemplar of stealth, tracking and scouting skills.[2a]

Before the Founding of the Guard regiments, Mkoll was a woodsman in the nalwood forests of Tanith. His wife Eiloni predeceased him (and Tanith itself) by several years, and both of his sons perished in the destruction of the planet.[1i]

Promoted to the rank of Sergeant and leader of the regiment's scout unit, Mkoll was widely respected for his superlative stealth and tracking skills and noted to be one of the finest scouts in the regiment by Colonel Colm Corbec.[1a] On the forest planet of Ramillies 268-43, Mkoll pursued traces of enemy activity deep into the wilderness and located a blind Chaos Dreadnought, which he killed single-handed through a combination of his natural stealth skills, bravery, and realizing the uniquely hostile nature of the native flora which allowed him to distract the leviathan.[2a]

On Fortis Binary, Colonel Corbec deployed Mkoll in the vanguard of his section during the Tanith 1st's counter-attack that would end up securing victory on the world. Mkoll's acute observational skills meant that he was the only one to notice that Trooper Skulane's death had been caused by a corrupted Trooper Drayl; in warning the rest of the column he was lightly wounded.[1b] After the situation had been resolved and Corbec's unit linked up with that led by Ibram Gaunt, Mkoll was once again deployed in the vanguard, this time of the larger force.[1c]

In the aftermath of some regimental downtime on the world of Pyrites,[1b] Mkoll became involved in both the feud with the Jantine Patricians regiment and the machinations of the radical Inquisitor, Heldane, when he was assigned to the revenge team sent to cause havoc amongst the Jantine and rescue the kidnapped Major Rawne.[1d][1e][1f]

On the regiment's next posting, the death world Menazoid Epsilon, Mkoll led the entire scout platoon in advance, mapping out the land for those following. He diverted from the high command's assault path on Gaunt's orders, instead searching for an entranceway to an underground complex which would be revealed to contain a corrupted Standard Template Constructor.[1g] Once Mkoll had located the complex, Gaunt assigned him to the commando team which ultimately destroyed the STC.[1h][1i][1j][1k][1l]

On Monthax, Mkoll performed the advanced scouting of the Chaos positions and also stumbled onto a ruined structure that he deduced was important to the enemy in some way. More strangely, Mkoll confessed that, having found the ruin once, he retraced his steps but was unable to find it again. Mkoll's own men thought their Sergeant may have made a mistake, but Gaunt's confidence in Mkoll's abilities was such that he decided there was something strange about the ruin that warranted investigation.[2b]

The structure turned out to be an Eldar edifice housing the remains of a Webway Gate. A small force of Eldar from Craftworld Dolthe were trying to close the gate before the Chaos forces arrived, and created a psychic illusion that made the Tanith troopers believe that they were on Tanith, defending against the Chaos invasion that destroyed it. Mkoll fought hard, escaping from the entire Chaos army on foot, even as part of his mind tried to convince him that what he was seeing wasn't real. Mkoll's instincts proved crucial to leading Gaunt and Inquisitor Lilith Abfequarn back to the ruin, despite the Eldar glamour. After the Gate was closed and the battle was won, Mkoll said farewell to his wife's memory again.[2b]

Mkoll continued to fight superbly in the name of the Emperor after Monthax. In the closing stages of the Siege of Vervunhive, Mkoll was one of thirty Tanith selected personally by Gaunt to take part in Operation Heironymo, the mission to infiltrate The Spike and assassinate Heritor Asphodel[3] and he was also in on the mission to rescue Saint Sabbat's remains on Hagia ahead of the planet's destruction.[4] On Phantine, Mkoll was picked for Operation Larisel but his Valkyrie was blown from the sky, leading everyone to believe he had been killed.[5a] In fact, Mkoll was miraculously thrown clear of the explosion and survived by activating his parachute, landing on a mountainside beneath the layer of toxic cloud known as the Scald.[5b] Mkoll then proceeded to climb the mountain whilst wearing rebreather gear and use a narrow support girder running alongside a gas pipe to reach the city of Ouranberg, which he infiltrated in the midst of a pitched battle between the Imperial Guard and Blood Pact.[5c] Using his superlative stealth skills, Mkoll made his way into the enemy HQ and attacked Sagittar Slaith, the target of Operation Larisel. While Mkoll's las-fire proved ineffective against Slaith and his loxatl bodyguards, he revealed that it was just a distraction to keep Slaith in the room long enough for explosives Mkoll had planted to detonate. The blast knocked Mkoll unconscious but killed Slaith, completing the operation.[5d]

The Tanith's next campaign was on Aexe Cardinal, where Mkoll supervised the induction of the first non-Tanith recruits into the prestigious scout squad.[6] On Herodor Mkoll out-stealthed and slew Skarwael, a Mandrake who was one of The Nine, elite Chaos assassins sent to kill Saint Sabbat by Magister Enok Innokenti.[7] He was then chosen for the EZ-level insertion/assassination mission to Gereon, leaving Caober in charge of the scout squad whilst he and Mkvenner were gone. Mkoll played a vital role in the mission and in the period of guerrilla warfare that followed after the Tanith team were stranded on the enemy-occupied planet, helping train the Gereon resistance into an elite insurgency force.[8][9] Upon the team's return to the regiment, Mkoll tracked a Chaos Stalker to its lair on Ancreon Sextus, becoming briefly trapped on an Archenemy staging world connected to Ancreon Sextus by sorcerous portals before escaping along with Belladon scout trooper Wes Maggs, who would become one of Mkoll's best men.[9a]

Mkoll would face one of his greatest personal tests on Jago, when his commander Ibram Gaunt was captured by the enemy and presumed dead. In a supreme display of loyalty to Gaunt, Mkoll abandoned his post and joined Eszrah ap Niht on a suicide mission into the Blood Pact camp, ultimately discovering Gaunt tortured but alive and bringing him back to the regiment.[10a]

Mkoll continued to be a senior officer in the Tanith regiment, and despite his personal reserve word of his deeds reached and piqued the interest of Sar Af, a White Scars Space Marine who joined the Ghosts along with two other marines for the duration of the mission to Salvation's Reach.[11] On the journey back from the Reach, Mkoll and Sar Af passed the time by hunting each other through the abandoned decks of the Highness Ser Armaduke. Mkoll was able to get the drop on Sar Af, an extraordinary feat for an unmodified human, and while Sar Af turned the tables by revealing that his fellow marines Kater Holofurnace and Eadwine had joined in the hunt, Mkoll then revealed that he had lined the chamber with fake explosives, and had it been a combat situation he could have sacrificed himself to kill three Astartes, an extremely favourable kill/death ratio from the viewpoint of the Imperial Guard.[12]

Later during the return journey, the Highness Ser Armaduke suffered an unplanned re-entry into realspace and was attacked by V'heduak raiders. Extremely disoriented by the sudden re-translation, which jumped the entire regiment and ship's crew ten years into the future, Mkoll prowled the ship's corridors while convinced that he was dead, killing V'heduak without fully understanding the situation.[13a] Eventually returning to his senses, he linked up with Ornella Zhukova, who had advanced ahead of her company, and witnessed her solo capabilities first-hand.[13b] Later, after the regiment had arrived at Urdesh, Mkoll asked Zhukova to join the scout squad.[13c]

When the forces of Anakwanar Sek launched a full-scale assault on Imperial positions in the city of Eltath, Mkoll was at the forefront of the fighting. Scouting a line of abandoned hulks chained together along the shore, Mkoll discovered a large force of Sons of Sek advancing unopposed and sent Zhukova back to warn Rawne, who was commanding the regiment at the time. Fighting alone, he killed several Sons but was eventually overwhelmed and captured, losing his Tanith warknife in the process. His comrades later discovered the knife near a pile of enemy corpses, and for the second time Mkoll was presumed dead by the regiment.[13d] Mkoll's captors took him to Magister Sek's hidden island base, where captured Guardsmen were either converted or sacrificed. Kept alive because Sek had decreed the Tanith First to be important to his plans, Mkoll took an enemy damogaur captive and disguised himself as a Son of Sek, forcing his captive to lead him inside Sek's fortress.[14a] There, Mkoll discovered that Kater Holofurnace and Brin Milo were being held aboard Sek's ship, and freed them both along with an Urdeshi Colonel named Mazho.[14b] Together, the four of them infiltrated a huge meeting at which Sek planned to address his forces, and while Mazho and Holofurnace were killed, Mkoll and Milo succeeded in chasing the injured Sek through a Warp portal he had conjured to escape, arriving on a remote Urdeshi island. There, Mkoll shoved a bomb down Sek's gaping maw, explosively killing the most dangerous Archenemy leader in the Sabbat Worlds Crusade.[14c]

At the time of the Fortis Binary campaign, Mkoll was a youthful-looking man in his mid-fifties with a wiry frame and hair that was just starting to turn grey. A woodsman by trade, Mkoll spent his early adulthood in the nalwood forests of Tanith, and learned to sense and interpret the smallest change in his environment. A born hunter, he carried this skill with him as a scout when he joined the Guard. His ability was so innate that he regarded it as a given, and it took Gaunt to suggest to him that it was the result of spending so much time in Tanith's shifting woods.[1i]