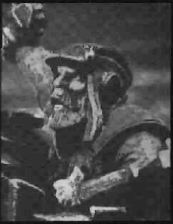 Schfeer was originally conscripted from the squalid streets of the fanatically theocratic world of Varoli Secundus. He rose through the ranks and eventually reached Captain, commanding the tank company of one of his homeworld's Regiments in six successful campaigns. However it was during the sixth campaign that he showed signs of stress and mental instability. After a night engagement against anti-Imperial rebels where he lost four tanks, Obadiah ordered a near suicidal attack against a strong defensive position but in the end managed to destroy the enemy's bunkers and artillery. Following this success he mounted a large speaker on his tank and used it to issue orders and shout encouragement to his men as well as blasting military music to the enemy as his unit advanced. Though long exposure to the horrors of war had unhinged him, he has since regained his composure and his men follow him willingly and continue to win battles. His tactics seem to work, and he inspires his men to reckless bravery. He was named "Crazy" Obadiah, by his men.[1]